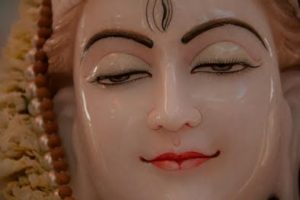 What is absolutely in balance? The Father.  Absolute stillness and silence.

When the Father stirs, we call her the Mother (mater, matter).  Movement begins with her. She says:

Divine Mother:  I am thought of in many forms — as Mary, as Shakti, as Marḗ, which is very close because it is the word for ocean in your world and language. It represents the movement and the giver of life, the creator of life, of love, of form, of substance, of essence. …

In universal philosophy, it’s the reverse. The Mother is creative, protective, and transformative and the Father is passive and loving.

Even a single breath reveals the pattern of the Mother. Creative on the in-breath, preservative (in the Father’s stillness) on the pause, and transformative on the out-breath. (3)

The Mother births something from her love into the boundless space of the Father. Right now she’s birthing a new region of space in which whole civilizations and planets can ascend without their inhabitants dropping their physical bodies.

And so does life evolve, from God and back to God again, enlightened.

Until this very moment, at some deep level of myself, I’ve led my life as the constant complaint that incarnated life is too difficult.

But just this very moment, transformative love arose and obliterated that complaint. In THIS space of love and for as long as it lasts, there’s no complaint. There can be none.

If this love is God, then I now have all I want – a life of such enjoyment and satisfaction because of this love and the enjoyment of the presence of God in the form of this love.

For as long as this love consents to stay, my life as complaint has disappeared.

(2) Firstly, when we see that we and the Father are One, for the amount of time we’re in that space, “we” disappear. Like Sri Ramakrishna’s salt doll that went to measure the ocean, we dissolve in it. Who is there then to know the One?

Moreover the Father cannot be known in the ways we usually conceive of knowledge as being. We must become the One to “know” it, as I understand it.

(3) This is my personal interpretation. I realize some others see the outbreath as creative. For the purposes of meditation I think either will produce the desired result of samadhi or a still and focused mind.