/ Home / News / Spirituality / Peace / World Peace is In Our Hands. Meet One Pie Baker Who Traveled to 9 Countries in 90 Days to Prove It 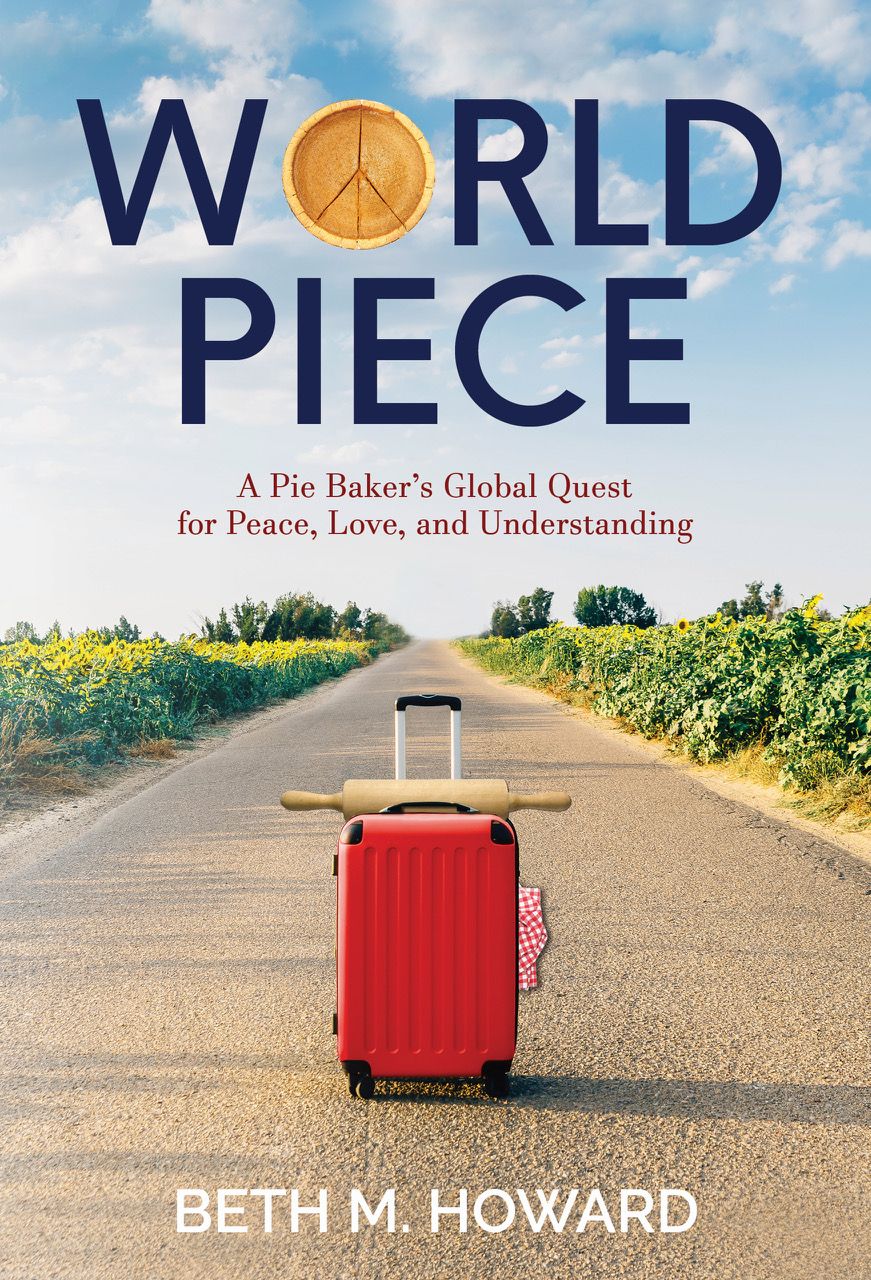 Pie, I believed, could be a Trojan Horse for peace.

I wasn’t vying for some unique travel hook or attempting to set an unclaimed record—this wasn’t Around the World in Eighty Pies. I simply wanted full-on immersion, to learn about the people in each destination on a more personal level, and to give back in some meaningful way, more than by contributing a few American dollars.

My goal—to make pie and change the world—didn’t seem far-fetched because pie had saved my life, twice. The process of making pie—from mixing the dough with my bare hands, to rolling it flat and smooth, peeling the apples, and crimping the crust—was a moving meditation that engaged all my senses and grounded me in the present.

My first experience with this was when I left a soul-draining job as a web producer. I traded my big salary to earn minimum-wage as a pie maker. The baking job drained my savings account, but its curative benefits were worth millions. Eight years later, pie brought me back from the brink after my husband died.

I made pie for friends, for family, I even handed out free slices of it on the streets of Los Angeles. By taking the focus off myself to bake for others, I met people whose grief was greater than mine and it shook me out of my self-pity. Pie was my therapist, my suicide prevention, my survival. I am not exaggerating when I say that butter, flour, and sugar, along with the act of doing something nice for others, restored my will to live.

I had already tested pie’s world-changing abilities in several countries. I taught pie making to kids in a South African township. In Tokyo, I baked with a group of Japanese businesspeople who spoke no English. From Germany to Mexico, pie found its way into my travels, giving me an entrée into people’s homes, cafés, kitchens, and conference rooms.

During my three months of travel, I would teach pie-making classes and explore the pies of other regions: Mexicans have empanadas; Italians, pizza; Australians, pasties; Greeks, spanakopita. If you go by the loose definition of pie—anything that consists of a filling encased in a crust, whether baked or fried, open-faced, or folded over—every country in the world has some form of it.

Through an exchange of ideas, recipes, and food, I would connect with people. We would forge new friendships, bridge cultural divides, and end up with, yes, world peace. I would call my mission “World Piece”—as in slice—and appoint myself as a pie ambassador. I’m not schooled in politics, nor am I a professionally trained pastry chef. I was merely an idealist with a nagging desire to promote peace and kindness by bringing people together through pie.

As an apple orchard owner in New Zealand told me, “It was never going to be about what you could teach the world so much as what the world could teach you.”

Here are a few of the things I learned:

1. Pie is an ideal vehicle for immersive travel. Something as simple as homemade pastry and fruit opened doors to places I would not have otherwise been invited to. I can still picture the pie cooling on the windowsill of a Mumbai high-rise, rolling dough outside on a picnic table in the Black Forest, and working alongside Thai chefs in a Bangkok hotel kitchen. No matter where I went, no matter the age, nationality, or language spoken, making pie had the same results: the bakers beamed when their finished pies came out of the oven and couldn’t wait to take their pies home to share with their friends, families, and coworkers. Baking together, putting down phones, rolling up sleeves, overlooking differences, and having a common purpose is as unifying as the Olympics minus the competition, with everyone on the same team.

2. Taking action is the antidote to grief. When my husband Marcus died suddenly at 43, I was consumed with the fear of death—not just my own, but of everyone I love. Making and sharing pie with others pulled me out of the quicksand of grief, reminding me to keep living, but in a more purposeful way. Shortly before my trip, I left my home of four years that I loved, gave up the pie business I had built there, and lost one of my terriers to a coyote attack. My grief over this trifecta of loss was as debilitating as losing Marcus, so I packed up my rolling pin and set forth on my pie quest. Pie kept me focused on moving forward, which led to a new house, a new dog, and new love far sooner than I ever imagined.

3. The world is safer than you think. Before my trip, reading the news terrified me enough to not want to leave the house, let alone go around the world. But once I left, I quickly recalled from all my previous travels that the hysteria the media doles out is mostly unfounded. There is kindness everywhere. Everywhere. In Beirut, Lebanon, among the rubble from a recent war, a man repaired the broken zipper on my bag and refused payment. In Greece, during a financial crisis deemed so “dangerous” the U.S. State Dept. warned Americans not to go there, my only peril was a plate of calamari that made me deathly ill.

When Nelly Bly traveled solo around the world in 1889, someone suggested pack a revolver, a notion she readily dismissed. “I had such a strong belief in the world’s greeting me as I greeted it, that I refused to arm myself.” I wholeheartedly agree.

4. Everyone is on their own journey. While I was in Thailand, my dad needed melanoma surgery, but his insurance company delayed its approval. Unable to take charge of the situation, I texted my sister, complaining IN ALL CAPS that my parents needed to be more assertive with their insurer. She replied in her gentle way, “they are on their own journey.” This one simple statement helped me to let go of my anxiety (and my desire for control) for the rest of my trip, and it continues to help me to this day. As for my dad, my frustration was a waste of precious energy as he had his surgery two weeks later.

5. Cultural appropriation is a myth. I’ve long known that pie is not American; it’s an immigrant from Egypt with origins that date back to 6000 BC. But until I went to India, I didn’t know that samosas are not Indian; they came from Persia, and Indian spices were brought to the subcontinent by the Portuguese. That made me want to find out what other foods didn’t originate where I thought they did. Hamburgers and French fries came from Germany and Belgium, respectively. Ketchup was created as a fish sauce—in China. Paprika, which is synonymous with Hungary, came from Mexico, landing in Spain (in the 16th century), Africa, and Asia before reaching Central Europe. Humans and their foods have been migrating and mingling with each other since the beginning of time, creating a rich and complex interconnected web that cannot be untangled. Nothing can be claimed as “ours alone” when 99.9% of our DNA is identical.

We are all slices of the same pie.

Beth M. Howard is the author of World Piece: A Pie Baker’s Global Quest for Peace, Love, and Understanding; Making Piece: A Memoir of Love, Loss, and Pie, and the cookbook Ms. American Pie. She has written for The New York Times, Real Simple, and Country Living, among many other publications. To learn more, visit theworldneedsmorepie.com.