I hope you’re sitting down for the next two. Why isn’t this information known?

Cassandra Estan, “our favorite registered nurse” and a certified medical investigator, goes over the Covid test swab and points to ingredients like Ethylene Oxide, which is a known carcinogen in humans. The swab is pushed up the nose halfway to the brain.

It has mutogenic effects and Cassandra lists the various ailments and neurological conditions that can result from its presence in the body.

I believe Cassandra risks her life to bring us this information. Hit graphic to go to video.

Aluminum in vaccines? What for? Oh, the nanoparticles of aluminum bind with other cells and travel throughout the body. And we haven’t done any assessments on the impact of the nanoparticles on the brain, to which they travel? They persist in the brain for decades? And we’re mandating them for children?

We know the NWO intended to trigger those nanoparticles using 5G technology, according to Matthew Ward, and we also know our star family has deprogrammed the nanoparticles or microchips and neutralized the vaccine to the extent karmically allowable.  (1)

But I personally don’t feel like relaxing on the subject even with that knowledge. Mass murder is mass murder.

Why was this information not made public? Instead every major information carrier has blocked it.  This man took it from a screen with his cellphone.

Simons’ calm update on what can be said. The big news: He notes the rumor that Donald Trump will return “to the game” on his birthday and Flag Day, June 14, 2021. And he reports that the Arizona audit results are expected June 14 as well.

The audit will announce that the vote count has shifted from a 10,000 plus margin for Joe Biden to several hundred thousand for Donald Trump.

Those mainstream media that don’t report the audit’s findings will suffer sanctions. The military may use this as the occasion to remove Joe Biden and re-install Donald Trump, producing their own evidence of a system-wide tally of all votes cast – which the military kept, in parallel to the Dominion software. The military already know; they’re just waiting for the public to catch up. If his Youtube video is taken down, go to Simon’s own site: http://simonparkes.org. 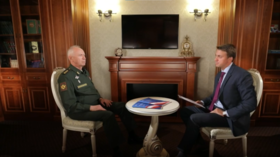 Not everyone is rattling sabers. The Russians kicked the Illuminati out of their country some years ago. I’d be prepared to sit down with them. It’d be worth the risk.

I’ll probably be called a commie and a socialist for saying it, but I respect the Russians’ sincerity in most of the actions they’ve taken.

If we laid down our arms and presented no threat to them, I think they’d do the same.

We are currently witnessing the formation of nothing less than a “new world order,” with the existing international legal system fracturing and states taking sides in a fresh Cold War, Russia’s deputy defense minister has told RT.

Colonel General Aleksandr Fomin spoke to the network ahead of the 9th Moscow Conference on International Security, scheduled to take place on June 22-24 in the Russian capital. The event brings together military officials and security experts from different countries, with some 49 nations having already confirmed their participation.

The upcoming conference is an explicitly non-partisan event, and the countries are invited to partake regardless of their current relationship with Russia, Fomin stated.

“At the forum, we give the floor not only to partners who share our approaches to solving major world problems, but also to opponents, countries with which cooperation today is at bare minimum or equal to zero,” Fomin said.

Discussions like those at the Moscow forum are particularly important during challenging times, the official added, as the world’s political and security landscape is currently experiencing historic shifts, with the ‘old’ world order crumbling apart.

Today we are witnessing the formation of a new world order. We see a tendency for countries to be drawn into a new Cold War, the states being divided into ‘us’ and ‘them’, with ‘them’ unambiguously defined in doctrinal documents as adversaries.

“The existing system of international relations and the security framework is being systematically destroyed. The role of international organizations as instruments of collective decision-making in the field of security is being diminished,” Frolov said, without specifying examples.

Over the past few years, particularly under former US president Donald Trump, multiple international agreements ceased to exist. Effectively, only one major accord between Washington and Moscow – the New START treaty – remains, after President Joe Biden agreed to extend it for another five years.

The emergence of new weapons systems, as well as the efforts of some nations to bring warfare into areas that have never seen it before [Read: pandemic bioweapons and toxic vaccines], further accelerates the emergence of a “new world order,” Frolov noted.

“Fundamentally new types of weapons that radically change the balance of power in the modern world are emerging, with warfare getting into new areas – into space and cyberspace. This, of course, leads to a change in the principles and methods of war,” he added.

Warning: If printing off this article, be sure not to print off the attached book as well, unless you intend to.

(1)  All evidence is contained here.

This evidence will appear credible only to those who first accept the reality and validity of credible channeled messages, its main source of information.