The Alliance, intel investigators, and even past business associates of political personalities who “took a fall” are revealing evidence of corruption and treason while more lawsuits are being launched against organs of the deep state.

Rudy Giuliani is partnering with Steve Bannon to expose one of the most corrupt crime families in US political history.

On Tuesday morning Rudy Giuliani told Steve Bannon on The War Room that MAJOR documents will drop tomorrow on criminal activity by the Biden family.

The evidence will include non-financial criminal activity!

From the interview this morning on Steve Bannon’s War Room.

Steve Bannon: In the next 24-48 hours are you going to bring forward potential other information related to non-financial criminal activity?

Rudy Giuliani: We’re going to do both. There will be more financial criminal activity, more proof on the subjects we already have and even bigger deals that are eye-popping. And some personal conduct that has to be brought to the attention of the public to make sure people are safe. And that has to be handled appropriately before it can be discussed.

Steve Bannon: Do you believe that personal activity is criminal?

Rudy Giuliani: I have no doubt it is. All you have to do is look at it and figure that is true.

Steve Bannon: I take it people will want to watch Maria Bartiromo tomorrow?

This aired on The War Room moments ago.

And more supporting evidence … this time from South Africa.

Charles Ward has been given 1500 documents from a South-African case file on the deep state. He hopes to have it published this week to his new site, https://drcharlieward.com.

However, entry to the “Insiders Club” to see the material is $11 a month. Dept. of Justice Files Anti-Trust Lawsuit Against Google: ‘This is a Monumental Case’

The U.S. Department of Justice (DOJ) has filed an anti-trust lawsuit against Google, alleging that the company has been illegally abusing its position of power online in order to create a monopoly on searching and advertising.

The lawsuit, filed only this morning, states that “Google has willfully maintained and abused its monopoly power in general search services through anticompetitive and exclusionary distribution agreements.”

Consequently, the lawsuit seeks to “restrain Google LLC (Google) from unlawfully maintaining monopolies in the markets for general search services, search advertising, and general search text advertising in the United States through anticompetitive and exclusionary practices, and to remedy the effects of this conduct.”

It additionally discloses that Google’s online dominance has resulted in “a market value of $1 trillion and annual revenue exceeding $160 billion” and that it has used “anticompetitive tactics” to extend “the cornerstones of its empire.”

The case is a result of over a year long investigation, and is an attempt to challenge Google’s online supremacy which has been affected by abusing its position in violation in Section 2 of the Sherman Act. The DOJ has been joined by 11 state attorneys general as plaintiffs in the case.

The DOJ raises numerous complaints against Google, mentioning that the tech giant has “exclusionary agreements, including tying arrangements” in order to “lock up distribution channels and block rivals.”

The department also claims that Google spends billions each year ensuring that it remains the default internet browser and search engine. Companies it pays for this include “Apple, LG, Motorola, and Samsung… AT&T, T-Mobile, and Verizon…Mozilla, Opera, and UCWeb.”

Furthermore, “Google monetizes this search monopoly,” the revenues of which it “‘shares’ with distributors in return for commitments to favor Google’s search engine.”

The DOJ makes the argument that “[t]hese enormous payments create a strong disincentive for distributors to switch” and also “raise barriers to entry for rivals.”

Google’s competitors are moreover denied “vital distribution, scale, and product recognition—ensuring they have no real chance to challenge Google.”

According to the DOJ’s claims, Google employs “distribution agreements to lock up scale [of data] for itself and deny it to others” which thus “unlawfully maintains its monopolies.”

The tech company’s practices are termed “anticompetitive” according to the ruling of 2001 antitrust case, United States v. Microsoft, which found that “anticompetitive agreements by a high-tech monopolist shutting off effective distribution channels for rivals, such as by requiring preset default status (as Google does) and making software undeletable (as Google also does), were exclusionary and unlawful under Section 2 of the Sherman Act.”

The DOJ’s papers report how Google employees received specific instruction after United States v. Microsoft to avoid words which could land them in trouble in any future antitrust case.

They were warned that “Words matter. Especially in antitrust law” and thus told to “avoid observing that Google has ‘market power’ in any market.”

In a statement this morning, Attorney General William Barr said: “This is a monumental case for the Department of Justice and, more importantly, for the American consumer.”

Continuing, Barr stated that the DOJ had “convincing evidence that Google no longer competes only on the merits but instead uses its monopoly power – and billions in monopoly profits – to lock up key pathways to search on mobile phones, browsers, and next generation devices, depriving rivals of distribution and scale.”

On top of the harm which Google’s actions cause to “users, advertisers, and small businesses,” Barr also noted that the DOJ also had wider concerns about “online platforms” regarding “online child exploitation, public safety, and censorship.” These, however, would not be covered in the lawsuit filed today as they are being dealt with separately.

Google has faced growing criticism in the wake of its censorship of conservative websites and its manipulation of search results. It has been exposed in its attempts to alter the outcome of the upcoming presidential election, by seeking to suppress information.

Project Veritas, which has provided much evidence of Big Tech censorship, released a video yesterday in which a Google employee described the company’s leftist leanings as akin to “playing selective God.” 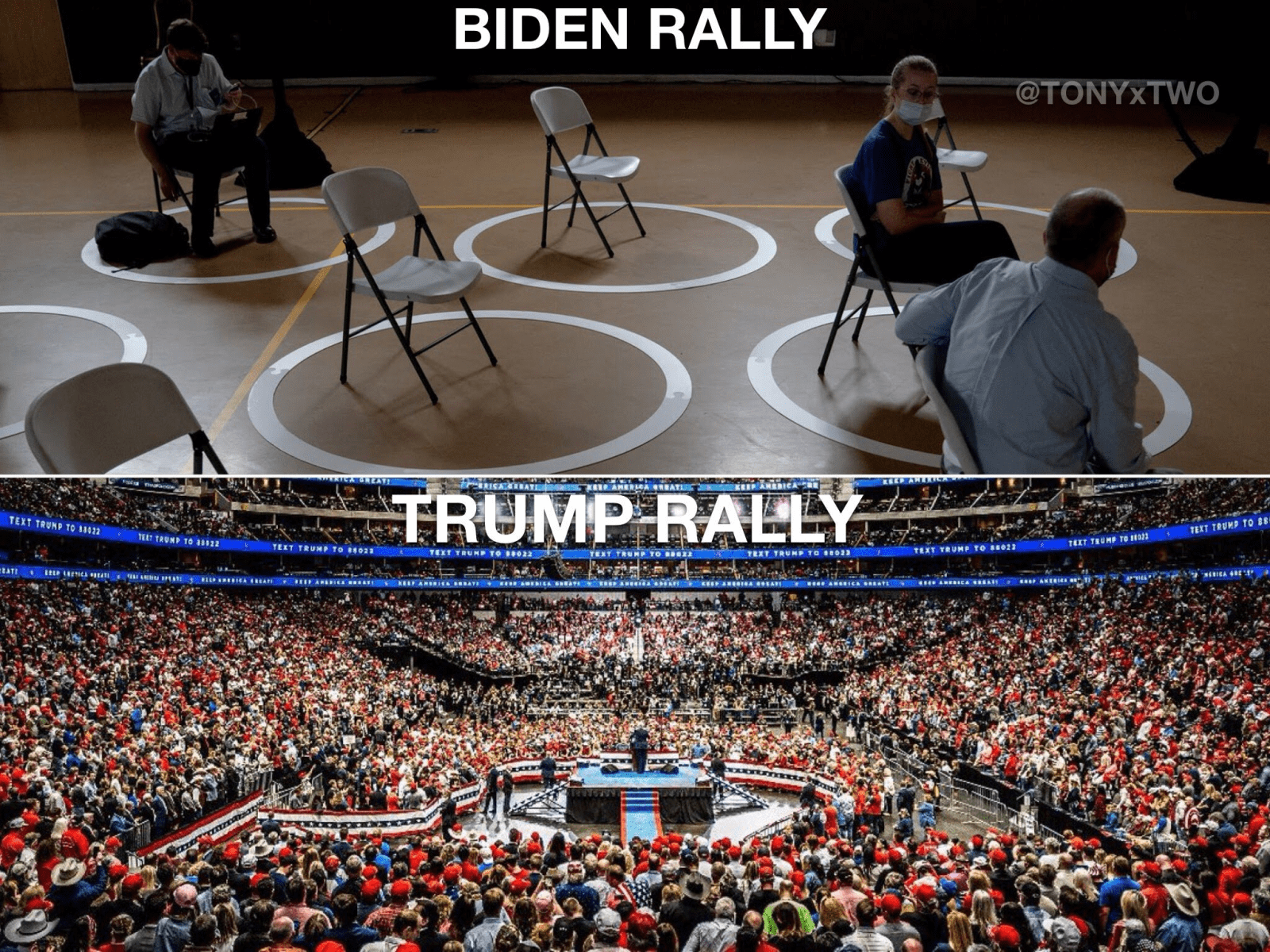 Below is the summary of events since Labor Day.  President Trump has now held events with nearly 360,000 event goers while Biden has entertained an estimated 637 event goers. …

In Summary – Joe Biden is currently not in the race. He has virtually no events and no attendance at his events when he has them. President Trump is absolutely crushing it. The Department of Homeland Security announced Tuesday the opening of a Center for Countering Human Trafficking.

“Human trafficking is modern day slavery. There is no other way to say it,” said DHS Acting Secretary Chad Wolf. “The words are strong because the actions are evil. The forms of exploitation, sex trafficking, forced labor, and domestic servitude that constitute human trafficking are antithetical in every way to the principles of human dignity that Americans hold dear. The launch of this Center for Countering Human Trafficking represents the investment of resources, attention, and time by President Trump to combat and dismantle all forms of human trafficking.”

The center, which has been operational since early September, is based in Washington and led by U.S. Immigration and Customs Enforcement (ICE), a global leader of criminal investigations into human trafficking and sexual exploitation. The center will be staffed with law enforcement officials from Homeland Security Investigations (HSI) and across DHS, as well as subject matter experts and support staff from 16 DHS components—all focused on the “4 Ps” of the center’s mission: prevention, protection, prosecution and partnerships.

Wonder why you never hear about President Trump’s work to combat human trafficking?

Reporters asked ZERO questions today after it was announced that the DHS opened a Center for Human Trafficking.

Wonder why the you never hear about @realDonaldTrump administration’s work to combat human trafficking?

Today Trump Admin announced the first Govt. Center For Countering Human Trafficking in the US. They asked if the press had any questions.

This is what happened… *crickets* pic.twitter.com/lio4BwWoKi