Thanks to Suzi on Buy me a Coffee  for her research.

Collapse of buildings one block from Ivanka Trump condo. Deadly threat? Notice the small explosions indicative of demolition, as the buildings fall. (Go to 01:18.)

Our thoughts are with the victims.

To my thoughtful readers, is any more proof needed that there is a hidden war going on, mostly behind the scenes but some of it not? In this war, “collateral damage” is desired.

No need to be afraid. The Light wins. This whole site is proof of that. Thanks to Brian for the next three stories.

JAIL for Any doctor in Australia prescribing HCQ or Ivermectin

Maria Bartiromo, Sen. Johnson and Dr. Kory discuss the impact of censorship in the fight against Covid-19, in particular ivermectin, Anthony Fauci, and social media. First this morning, the potentially deadly impact of censorship and media cover-ups, as evidence mounts that big tech and corporate media have silenced truthful facts about COVID, to the detriment of the American people.

My first guests this morning were studying and questioning potential treatments for COVID-19 throughout the pandemic. And despite evidence of safety and efficacy of early treatment from at least one drug that’s been on the market for treating other sicknesses, any mention of either ivermectin or, to a lesser extent, hydroxychloroquine was met with attacks and takedowns by political operatives and some media.

Such mentions or posts were censored by social media. This week, the Department of Health and Human Services reported it will spend more than $3 billion on developing and manufacturing antiviral treatments to treat COVID-19.

In fact, Anthony Fauci was quoted as saying pills taken at home to treat COVID would be a powerful tool in our effort to prevent death from COVID.

KORY: Mountains of data have emerged from all — from many centers and countries around the world showing the miraculous effectiveness of ivermectin.

In early outpatient treatment, we have three randomized controlled trials and multiple observation, as well as case series, showing that, if you take ivermectin, the need for hospitalization and death will decrease.

BARTIROMO: That was in December of 2020.

This morning, we have breaking news that everything you said was right from this new paper out of Science on this.

[Wisconsin Senator Ron Johnson was among the first to question why certain medicines were being ignored or criticized to treat COVID-19.]

Well, Dr. Fauci happened. Media arrogance, social media censorship happened. That clip, that testimony from Dr. Kory, powerful testimony, was viewed by eight million Americans, who weren’t satisfied with the NIH guidelines that basically do nothing.

They wanted early treatment. It was pulled by YouTube. But we all know that Dr. Fauci, he’s not a modest man. You know, if you question what he did, apparently, you’re questioning science itself. But you can look at how he stage-managed the COVID crisis and call it anywhere close to a success; 600,000 people died, trillions of dollars of economic devastation.

He ignored early treatment. He probably helped sabotage the use of some of these things. And, Maria, you have to understand that Dr. Fauci, people in the health industries, the media, the social media, they will never admit they were wrong on this, because, if they do, they’re going to have to admit that literally hundreds of hundreds of people didn’t have to lose their lives, but for their censorship, their arrogance, and Dr. Fauci’s mismanagement.

BARTIROMO: This is unbelievable.

Dr. Kory, walk us through ivermectin. Now, ivermectin is a drug made by Merck. It has been on the market for a long time. Now this new news that we got on Friday that Fauci says they’re looking for treatments for COVID now.

One of the treatments that they’re looking at is made by Merck. So, the ivermectin Merck drug is off-patent, right? The pharma companies aren’t making any money on that because it’s off-patent. Tell us about that.

I mean, that — they do not make money off of ivermectin anymore. That’s an old drug. Many, many different manufacturers make it. Briefly, that is one of the oldest and safest drugs we have. It’s been given all around the world for decades, four billion doses.

That testimony that you played that I gave in December, the evidence was convincing then. It’s now overwhelming. Just yesterday, a paper by some of the top researchers in the world concluded that ivermectin leads to a massive reduction in the amount of patients who are dying. We’re getting reports from all over the world from Mexico that put it into their public health policy that huge numbers of patients are avoiding hospitalization and death in Argentina and in certain states in India.

We know it’s working. It’s working around the world. And nobody in the United States is hearing about it.

BARTIROMO: So, does this boil down to money then, Dr. Kory?

I mean, this drug made by Merck, ivermectin, is off-patent. They’re not making any money on it anymore. But now Fauci says he’s looking at a drug that’s going to be a patented drug made by Merck. Aren’t the underlying chemicals the same? So now they’re going to have that on patent, so that they can make a huge profit on it?

KORY: Well, that’s — I mean, that is so clearly — it’s a glaring example of the system that we’re in, which is that for-profit medicines are favored, to almost the total exclusion of nonprofit medicines.

[Steve: The truth is even worse.]
(Watch more at site.] 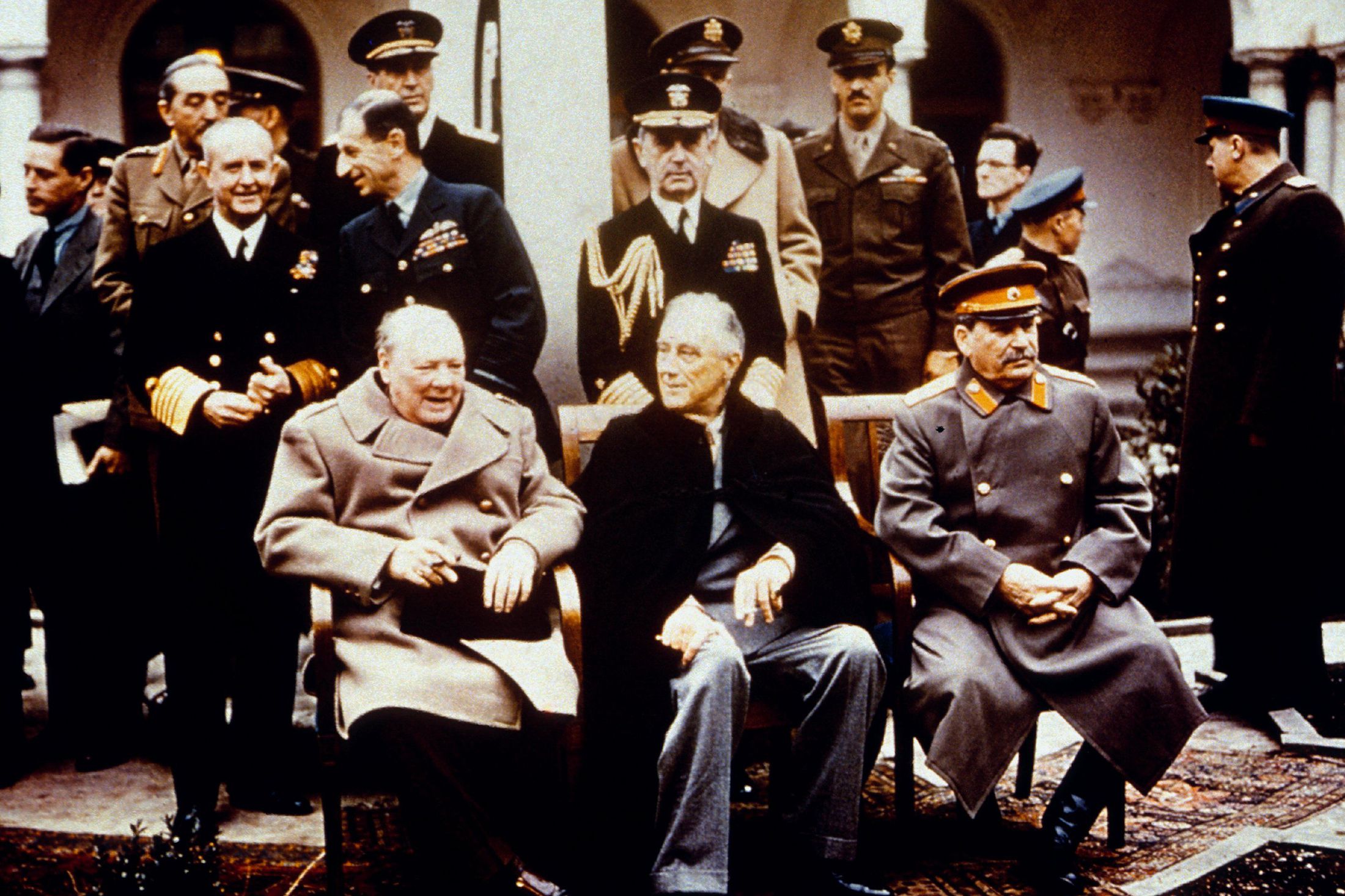 Yalta (left) was the Second World War conference at which the allies planned out the future shape of Europe … OK, OK, carved up Europe. Thanks to Brian.

Victory in the battle for Planet Earth is now within the grasp of the White Hats.  For that reason, a Yalta-type conference is being planned for this autumn to determine exactly how to manage the transition to a new age, according to multiple sources involved.

Participants in the conference will include representatives from the Dragon Family, from the Hongmen, from the British Commonwealth, from Russia, and from the P3 Freemasons who control the Vatican.  Mossad and the Pentagon are also welcome to send representatives if they wish, according to the sources.

During the summer, government agencies will be encouraged to run simulations of a jubilee-type event that would be used to start the new age.  The goal would be to make sure that as a result of the jubilee, humans would have ownership rights to their current residence.  Landlords would also be given compensation equivalent to their current rental income.

There would also be a redistribution of assets stolen from the people via central bank fiat fraud, especially since the gold standard was dropped in the early 1970s.  This is intended as a one-off reboot and not some new form of socialism.

Also to be discussed will be a complete reform of existing institutions including the IMF, the World Bank, the BIS, the UN, the International Criminal Court, etc.  An agreement has also been reached to finance the creation of a world future planning organization with an annual budget ranging in trillions of dollars.

An ultimatum was given via the UN Security Council to the WHO, the Rockefellers, and Rothschilds to stop their depopulation vaccination campaign or their headquarters in Geneva would be vaporized in a flash.  The world has awakened to their Satanic genocide plan.

Another target is the Pirbright Institute in Woking, England headed by Alex Younger and Richard Moore.  In addition, the Biden Residency shooting locations in Palo Alto California, Atlanta Georgia, New York City, and Amazon corporate headquarters will all be destroyed if this satanic political theater doesn’t get canceled.

The remainder of this article is only available to members of BenjaminFulford.net. Please Log In or Register to create an account