Building a Global Economy That Was Bound to Fail

A former economic hit man describes his part in setting up what he calls a “Death Economy.”

John Perkins was a highly paid economist pushing corporate interests in the developing world, a role he revealed in his bestseller, Confessions of an Economic Hit Man. In his new book, Touching the Jaguar, he writes about breaking away to a life of transformative action.

In this excerpt, he begins with a job interview and goes on to describe his work for an international consulting firm, Chas T. Main, or MAIN. The firm worked for the U.S. and other governments, and for organizations like USAID and the World Bank. It was a job Perkins describes as working for the “Death Economy.” 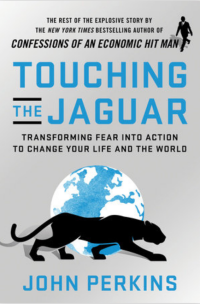 I met with the company’s president and its chairman of the board and had dinner with several vice presidents. They impressed upon me that MAIN’s work helped poor people around the world rise out of poverty and improve their standards of living. They showed me economic studies indicating that when lots of money is invested in infrastructure, a country’s economy grows.

All this was very consistent with what I’d learned in business school; it convinced me that MAIN’s projects were extremely beneficial. After a couple of days of being treated like a star athlete who is wooed by professional teams, I was offered a salary that was beyond my imagination, more than three times what my dad made as a teacher. In January 1971, the month I turned 26, the age when the Vietnam draft no longer wanted me, I became an economist at MAIN.

Deeply motivated by what I saw as the company’s commitment to helping the poor, I worked very hard to apply myself to this new job. It took me to assignments in Asia, Latin America, and the Middle East. In less than two years, I replaced the chief economist who was fired because he could not handle the challenges of working in these countries.

As the new chief economist, I proceeded to build a staff of more than three dozen highly qualified experts and was made the youngest partner in the firm’s 100-year history. It took me several more years to see through the veneer of “doing good.” However, eventually I realized that what I was really doing was using fancy economic studies to convince leaders of countries around the globe with resources US corporations wanted, like oil, to accept huge loans from the World Bank, the Inter-American Development Bank, the Asian Development Bank, or one of their sister organizations.

The funds would be used to hire US engineering companies to build infrastructure projects. The loans would leave the countries wallowing in debt. To pay them off, the country would be forced to sell its oil or other resources cheap to our corporations or meet other “conditionalities” that served the interests of what was becoming an American empire. I and others with similar jobs began to joke among ourselves about being “economic hit men,” EHMs.

Our job involved offering country leaders huge “rewards” for cooperating. A president’s son-in-law who owned a company that leased construction equipment would receive an extremely lucrative contract (e.g., millions of dollars for equipment worth half that amount). A sister’s catering service would provide all the food to construction crews at greatly inflated prices. The children of the country’s leaders and their friends would be admitted to US colleges with full scholarships and promises of good jobs during school vacations and following graduation. These and many other perks were outright bribes and yet totally legal.

If the leaders balked at our deals, we reminded them of those who had previously refused and were overthrown in coups or were assassinated: Iran’s Premier Mossadegh, Chile’s President Allende, Guatemala’s President Arbenz, the Congo’s President Lumumba, Vietnam’s President Diem, and a long list of ministers of state, judges, and lower-level officials. We EHMs made sure that country leaders knew that people we called “jackals”—highly skilled hit men and women with talents very different from ours who often worked as CIA contractors—were right behind us. We didn’t pack guns, but they did.

Once the leaders were convinced, their nations became our pawns. A country assumed the debt, but it never saw a penny of the money. Those funds were used to hire US engineering companies, like Bechtel, Halliburton, Stone and Webster, and MAIN, to build electric power systems, highways, ports, industrial parks, and other infrastructure projects in the countries. The funds were transferred from a bank in Washington, DC, to the company’s bank in Houston, San Francisco, New York, or Boston.

Although some of the people in the top executive offices of the World Bank and its sisters, as well as those in the engineering companies, understood that it was a shell game, most of their subordinates—engineers, economists, and others—did not. They were simply doing the jobs they’d been educated and trained to do.

The big winners were the US corporations that built the projects and those that benefited from the improved infrastructure—ones that drilled for oil, mined for gold and other minerals, or employed cheap labor in sweatshops—both types profited handsomely. The second tier of winners were the wealthy and powerful local families; their businesses also flourished due to the improved infrastructure. However, the majority of the country’s people suffered because funds were diverted from education, health care, and other social services to make interest payments on the loans.

Over time I began to see that the econometric models and statistics were skewed in favor of the rich.

In the end, the countries were never able to pay off the principle. This was an integral part of the EHM strategy. Teaming up with the International Monetary Fund (IMF), we forced the countries to restructure the loans and sell their oil and other resources cheap to our corporations without environmental or social regulations. We convinced them to privatize their utilities, prisons, schools, and other public-sector businesses and turn them over to US investors. In some cases, we coerced them into voting with Washington against Cuba or another country in the UN, or into allowing the Pentagon to build military bases on their soil.

During the early years at my job, I had found it easy to convince myself that I was doing the right thing.

South Vietnam had fallen to the Communist north, and now, I told myself, all of us were threatened by the Soviet Union and China. Indonesia would go next, then the “red tide” of communism would sweep across Asia, Latin America, Africa, and Europe and into the US. I was told that I was on the forefront of defending the entire globe against a menace worse than Hitler.

I’d been taught in business school that improved infrastructure stimulates economic growth and that prosperity would persuade nations everywhere to choose the US form of capitalism and democracy over communism. Our sophisticated econometric models showed that a country’s economy would mushroom—and everyone would be better off—as a result of our projects. Statistics indicated that more and more people were being connected to electricity and water and sewerage and buying TVs and other consumer goods.

Then, over time I began to see that the econometric models and statistics were skewed in favor of the rich. In the countries where I worked (and most of the world), a few families owned 70–95% of the recorded assets; their financial interests composed most, if not all, of the GDP. The rest of the population was part of a sub-economy that never made the statistics.

The rich were getting richer while the poor were staying the same or becoming poorer and many in the middle class were becoming impoverished. Statistically, the economy was growing, yet that growth only benefited an extremely small percentage of the population. The gap between rich and poor was widening drastically.

Even as I came to understand the biases in the models, it never occurred to me at the time that this inequality would eventually generate deep unrest, disillusionment, and violence. Ultimately it would lead to such desperation that millions of people would become homeless migrants or turn to drugs, suicide, or acts of violence that would be classified as terrorism by their victims and patriotism by their supporters.

It also never occurred to me that this whole system was ultimately self-destructive. The big corporations were sucking resources from countries around the planet at an unsustainable rate. The driving goal of the corporations was to maximize short-term profits. CEOs were intent on increasing short-term stock prices, market share, or both without regard for the future.

It was a system that was bound to fail, to kill itself—what economists would later define as a Death Economy. At the time, we were unaware that fossil fuel and other emissions, along with chemical fertilizers and insecticides, were polluting our atmosphere, poisoning our waters, and destroying our soils. It was a social-governmental-economic system that was totally irrational—truly a Death Economy.

This excerpt from Touching the Jaguar by John Perkins (Berrett-Koehler, 2020) appears by permission of the author and publisher.

John Perkins is the author of 10 books, including Touching the Jaguar, Shapeshifting, and Confessions of an Economic Hit Man, which was on the New York Times bestseller list for more than 70 weeks and published in 37 languages. As an economist, he advised the World Bank, United Nations, Fortune 500 corporations, U.S. and other governments. He has lectured at Harvard, Oxford, and other universities, is a founder of the Pachamama Alliance and Dream Change, and received the Lennon/Ono Peace Prize.