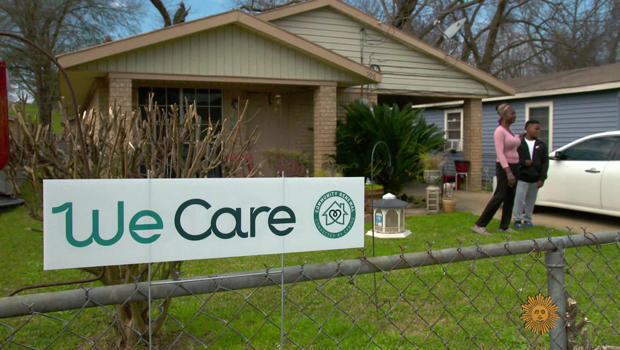 Thanks to one man’s vision, residents in rich and poor areas of Shreveport, La., are extending themselves to their neighbors, forging bonds in communities that have been marked by bigotry, segregation, poverty and isolation.  CBS NEWS

September 1988, Shreveport, Louisiana: 20-year-old William David McKinney had been fatally shot by a white teenager. Racial tensions, already simmering, boiled over. In the aftermath, anger, frustration and pleas for change.

The city was described as a “powder keg.” Thirty-two years later, that powder keg is exploding with yards signs that say, simply, “We Care.” They are everywhere.

“Everybody around here is like family, and that’s what neighborhoods is for – is to help one another,” said one resident, Johnnie.

Through the streets (back before COVID made it impossible), White and Black join together to walk the neighborhood, and pray for it – and this was before the killing of George Floyd. And while Shreveport has been changed like just about every city by his death, what hasn’t changed is the belief of a Shreveport pastor that communities torn down by bigotry, segregation and poverty can be built back up simply by neighbors caring for neighbors.

“We can email people all over the world, and we don’t know who’s living and dying four houses away from us,” said Mack McCarter, who invited “Sunday Morning” correspondent Lee Cowan to Shreveport back in February. He’s a proud native of this city. He left to go to seminary, and didn’t return for years, but when he did, he set up shop in Allendale – the “Bottoms,” as some used to call it – a neighborhood long plagued by crime and drugs.

Cowan asked, “What did people think when they saw you walking down these streets?”

“Well, so, I drove down and I thought, ‘Good heavens, I’m going to die.’ But I pulled over and stopped, and then went up to their shotgun row house, knocked on the door, and said, ‘There’s a group of us that believe if we’ll get to be friends then we can change this city.’ And not many doors opened.”

Not at first, but he kept knocking, and he started attending church in the area, too, mingling with the congregation just like any neighbor might. And over time, something started to happen. “I saw friendship overcome our racial divide,” McCarter said. “I saw it overcome our socioeconomic divide. I saw it overcome the fact that we had been strangers. And for sure, I saw it overcome fear.”

The experience was so impactful that he set up a non-profit called Community Renewal International, a faith-based organization that’s been making friends out of strangers for more than 25 years.

He hired those who believed as strongly as he did that an outstretched hand could work wonders.

“If we don’t do something to restore those relationships and restore that love from person to person, then America’s gonna collapse. We are going to fail,” said Sharpel Welch.

Welch (a civil society fellow with the Manhattan Institute) and Emmitt Welch live in what’s called a Friendship House, one of ten built in communities all around Shreveport – it’s part residence, part community center. The goal there is to mentor – to solve problems internally, street by street.

“Government is not gonna come down and model loving your neighbor to stressed and blighted neighborhoods,” Sharpel said. “They can’t do that. We have to do it.”

The Welches have taken in seven children from the neighborhood, raising them as their own. That’s what’s happening on one side of the Friendship House.

The other side is open to anyone in the neighborhood who needs it – and those who show up the most are teens. Emmitt and Sharpel Welch run a youth club, but it’s hardly your average after-school program.

“We spent time going to the local judicial system, getting kids out of handcuffs,” said Emmitt. “We’re going to parent meetings. We’re going to see the principal, to put ’em back in school after suspension. We were just doing a lot of work.”

That kind of help is often rejected, but not when it comes from inside the community. That’s what made the difference for Lakyra Burks, who said, “We care about our community, we care about our neighbors. And if we didn’t have those things, who would we lean on?”

Tierney Turner, whose father was killed when she was two, has watched the stability the Welches have brought become infectious. “The whole inside of my life got changed,” Turner said. “Introduced me to the world and what I can do better, to not have that situation happen to me, or my future husband or my family.”

Since Community Renewal moved in, crime has moved out – it’s dropped by more than half in Allendale. Graduation rates are up, and so is home ownership.

Skeptical? So is everybody.

Cowan said, “Some people watching this are gonna say, ‘It’s just too simple.'”

Emmitt said, “And to those people, I dare them to try it.”

“I get the cynical people,” Sharpel said. “I will challenge them, and I have done it. Get to know everybody on your street. First name, last name, something about them that you didn’t know before.”

McCarter has expanded the program into some of Shreveport’s wealthiest neighborhoods. “Human beings have faults and problems and heartaches, whether you’re rich or poor,” he said.

Paige Hoffpauir lives in a community where stately homes line a private golf course. “It might look good, but that doesn’t mean it is good,” she said.

She’s not comparing her problems with anyone’s, but she did realize that sometimes the only thing residents in this gated community had in common was the gate.  “It’s painful to live on a street, and not know your neighbor,” she said.

Isolation can be a real thing, even in a crowded sub-division. Her block parties look a little different than the one in Allendale, but many of the same people were there, and were there for the same reason.

“‘Random acts of kindness,’ that’s a great bumper sticker; it will not stop the disintegration of community,” Mack McCarter said. “It has to be intentional acts of connected caring.”

McCarter is no pushover; he gets the idea is pretty hard to grasp. But he believes to his core that caring can not only be cathartic, it might just change the world.

He said, “Lee, I am living for the hope that one day, one day in the human race, some child is gonna say, ‘What’s hate?’ And I’m living for that day.”