Thanks to Kathleen for these articles.

IBM announced this week that it would stop selling its facial recognition technology to customers including police departments. The move prompted calls for other tech firms, like Amazon and Microsoft, to do the same.

Krishna wrote that such technology could be used by police to violate “basic human rights and freedoms,” and that would be out of step with the company’s values.

“We believe now is the time to begin a national dialogue on whether and how facial recognition technology should be employed by domestic law enforcement agencies,” Krishna said.

The nationwide demonstrations following the police killing of George Floyd already have led to changes to police departments around the country – over use of force policies, police misconduct and police contracts.

The moment of reckoning over the country’s relationship with law enforcement also comes as artificial-intelligence researchers and technology scholars continue to warn about facial recognition software, particularly how some of the data-driven systems have been shown to be racially biased. For instance, the MIT Media Lab has found that the technology is often less successful at identifying the gender of darker-skinned faces, which could lead to misidentifications.

“This is a welcome recognition that facial recognition technology, especially as deployed by police, has been used to undermine human rights, and to harm Black people specifically, as well as Indigenous people and other People of Color,” said Joy Buolamwini, who conducted the MIT study and is the founder of the Algorithmic Justice League.

Nate Freed Wessler, a lawyer with the ACLU’s Speech, Privacy, and Technology Project, said while he was encouraged by the news from IBM, other major technology companies are still standing by the software.

“It’s good that IBM took this step, but it can’t be the only company,” Freed Wessler told NPR. “Amazon, Microsoft and other corporations are trying to make a lot of money by selling these dangerous, dubious tools to police departments. That should stop right now.”

At IBM, Krishna, who took over as CEO in April, noted the technology’s risk of producing discriminatory results in his announcement dropping “general purpose” facial recognition software.

“Artificial Intelligence is a powerful tool that can help law enforcement keep citizens safe,” he wrote to Congressional Democrats, who introduced police reform legislation on Monday that would ban federal law enforcement from using facial recognition technology. “But vendors and users of AI systems have a shared responsibility to ensure that AI is tested for bias, particularity when used in law enforcement, and that such bias testing is audited and reported.”

IBM had tested facial recognition software with the New York Police Department, but its adoption by other law-enforcement agencies appears to be limited. Analysts who track IBM have noted that the company’s facial recognition did not pull in much revenue, suggesting that the decision perhaps made good business sense.

Critics of the surveillance technology who have called on Microsoft and Amazon to make similar commitments say relying on data-mining tools to make public-safety decisions could endanger citizens.

“Face recognition systems have much higher failure rates when it comes from people of color and women and younger people, which can them subject them to great harm by police,” the ACLU’s Freed Wessler said. “Whether to use force, whether to arrest someone, whether to stop someone on the street.”

Amazon is a major player in facial recognition software. Its Rekognition product has been used by local police departments in Florida and Oregon.

The ACLU found in 2018 that the software mistakenly identified 28 members of Congress as people who had been arrested for crimes.

And Buolamwini has discovered that when the photos of several prominent black women, including Oprah and Michelle Obama, are scanned by Amazon’s technology that the system wrongly states that they are men.

Amazon has publicly defended its facial recognition software, saying studies challenging its accuracy have contained misperceptions about how the technology operates.

Amazon did not return a request for comment on IBM’s decision to walk away from facial recognition software.

Microsoft, which uses facial recognition technology through its Azure cloud computing services, also did not return a request for comment.

Big Tech’s use of facial recognition has sparked controversy and legal action for useage beyond law enforcement.

In January, Facebook agreed to pay half a billion dollars to settle a class action lawsuit for allegedly violating Illinois consumer privacy laws in its use of facial recognition technology that used face-matching software to guess who appears in photos posted to the social network.

Paramount Network has announced that long-running reality series Cops has been canceled as protests against police brutality take place worldwide following the death of George Floyd in Minneapolis.

The show was removed from Paramount Network’s schedule following the death of Floyd in May.

Cops began in 1989 and ran for 25 seasons on Fox before it moved to Spike TV, which is now Paramount Network. Season 33 of the series was scheduled to premiere on Monday, but no new episodes have aired.

A&E’s police reality series Live PD, which follows officers in real time, has also been taken off the schedule. A&E had ordered 160 additional episodes of Live PD in May before the protests started.

Floyd, 46, who was an unarmed black man, died while handcuffed and pinned to the ground by police on Memorial Day. Derek Chauvin, the officer who was videotaped placing his knee on Floyd’s neck, has been fired and charged along with the three other officers.

Floyd was buried Tuesday in his hometown of Houston.\

So she was surprised when an editor responded and even more surprised that the company agreed to update the entry.

Mitchum has gotten into a lot conversations about racism and injustice where people have pointed to the dictionary to prove that they’re not racist. It’s happened a lot more lately as the world reacts to the death of George Floyd while in the custody of four Minneapolis police officers.

The 22-year-old Mitchum recently graduated from Drake University and lives in Florissant, Missouri, just a few miles away from Ferguson, where protests over the 2014 police shooting of Michael Brown helped solidify the Black Lives Matter movement.

“I kept having to tell them that definition is not representative of what is actually happening in the world,” she told CNN. “The way that racism occurs in real life is not just prejudice it’s the systemic racism that is happening for a lot of black Americans.”

Merriam-Webster’s first definition of racism is “a belief that race is the primary determinant of human traits and capacities and that racial differences produce an inherent superiority of a particular race.”

Mitchum said many people she’s talked to use that to dismiss her concerns about racism and overlook broader issues of racial inequality because they don’t personally feel that way about people of color. 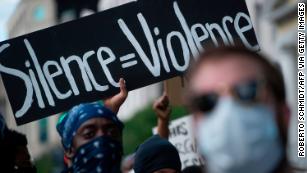 Mitchum said she sent her email on a Thursday night and got a reply from editor Alex Chambers the next morning.

After a few emails, Chambers agreed that the entry should be updated and said a new definition is being drafted.

“This revision would not have been made without your persistence in contacting us about this problem,” Chambers said in the email, which was provided to CNN. “We sincerely thank you for repeatedly writing in and apologize for the harm and offense we have caused in failing to address this issue sooner.”

Peter Sokolowski, an editor at large at Merriam-Webster, told CNN that their entry also defines racism as “a doctrine or political program based on the assumption of racism and designed to execute its principles” and “a political or social system founded on racism,” which would cover systematic racism and oppression.

“I think we can express this more clearly to bring the idea of an asymmetrical power structure into the language of this definition, but it’s there,” Sokolowski said.

He said that dictionary definitions have traditionally been short, because they had to fit so many words into their print editions. That’s no longer the case since so many people use the dictionary online.

Sokolowski said they update the dictionary two or three times a year to keep it as up-to-date as possible. He said the new language will probably be ready for the next update.

“The mission for [Noah] Webster himself, you know, back in his first dictionary in 1806, was to essentially present the current active vocabulary of American English and that’s still our mission today,” Sokolowski said.

Mitchum said she hopes the vocabulary change helps people have more productive conversations about race. She said she appreciated them taking her concerns seriously and talking through the issue.