Kathleen would like to draw attention to the overshadowed and overlooked fentanyl crisis. 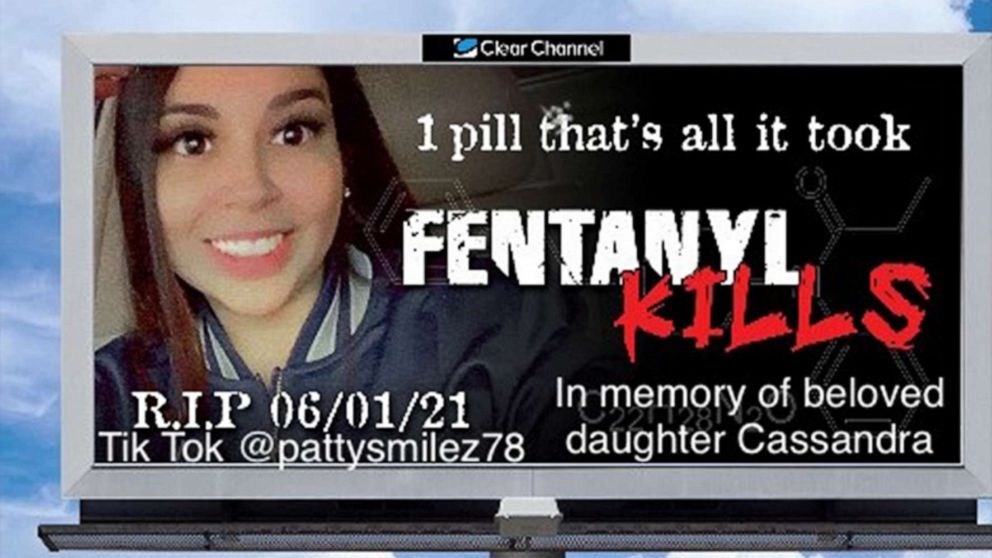 Cassandra Saldivar was 22 and the mother of a young son when she passed away.

Now, a photo of Cassandra is featured on a giant billboard that Saldivar is renting near AT&T Stadium in Arlington, Texas, to try to raise awareness of the dangers of fentanyl.

“[Fentanyl deaths] are becoming more and more common and I don’t want anyone to go through the same thing that my family is going through,” Saldivar told “Good Morning America.” “I wanted to do it to make people aware to not be taking anything that is not prescribed to them.”

Saldivar said she received a phone call in the middle of the night on June 1 that Cassandra, the mother of a 2-year-old son, was in the hospital.

When she arrived, she learned that her youngest child had passed away.

“It was a complete shock,” said Saldivar, who said she was told Cassandra had taken a pain medication that was laced with fentanyl. “I was like what in the world. I didn’t know it was possible to lace a medication with fentanyl.”

Saldivar, who is also helping to raise awareness by speaking out on TikTok and handing out flyers to high schools, said she wishes she had known as a parent about the dangers and increasing prominence of fentanyl in the United States.

“If I had known this before, I would have warned my kids, I would have said, ‘Watch it. You better be careful,'” she said. “I’ve been getting a lot of thank you’s from people saying that they’re going to talk to their children.”

Fentanyl is the primary driver of the significant increases in drug overdose deaths in recent years. More than 93,000 people died of a drug overdose last year, according to the Centers for Disease Control and Prevention.

Last month, top law enforcement officials in the U.S. announced the seizure of more than 1.8 million counterfeit pills during a coordinated series of law enforcement raids throughout the country since early August.