President Nicolás Maduro and the head of Venezuela’s national constituent assembly, Diosdado Cabello, have been indicted in the US. Photograph: Zurimar Campos/Venezuelan Presidency/AFP via Getty Images

Where does this fit with the international takedown of the cabal rumored to be happening during the virus outbreak?

Julian Borger in Washington and Joe Parkin Daniels in Bogotá, The Guardian, March 26, 2020

The US has charged the Venezuelan president, Nicolás Maduro, and 14 members of his inner circle with drug trafficking, “narco-terrorism”, corruption and money laundering, and offered a $15m reward for information leading to Maduro’s capture and prosecution.

Unveiling the indictment, the attorney general, William Barr, said the Venezuelan leadership collaborated with a dissident faction of the former Colombian guerrilla group, the Revolutionary Armed Forces of Colombia, or Farc, operating on the Colombian-Venezuelan border, which Barr described as an “extremely violent terrorist organization.”

“They’ve obtained the support of the Maduro regime, who is allowing them to use Venezuela as a safe haven from which they can continue to conduct their cocaine trafficking and their armed insurgency,” Barr said.

Alongside Maduro, Venezuela’s vice-president for the economy, Venezuela’s defence minister, and the supreme court’s chief justice are among the list of 15 current and former officials who have been indicted.

The state department announced a reward of $15m for “information related to” Maduro, and $10m each for information on Diosdado Cabello, the head of the national constituent assembly, and three others: Hugo Carvajal, former head of Venezuela’s military intelligence, Clíver Alcalá, a retired army major general, and Tareck Zaidan El Aissami Maddah, the country’s industry minister.

In separate indictments, prosecutors in Miami charged the head of the Venezuelan supreme court, Maikel Moreno, with money laundering. And charges dating back to May 2019 were unsealed in Washington against the defence minister, Gen Vladimir Padrino, accused of permitting planes carrying drugs to transit Venezuelan airspace.

Barr said that Venezuelan leaders and the Farc faction organised an “air bridge” from a Venezuelan airbase transporting cocaine to Central America and a sea route to the Caribbean.

“We estimate that somewhere between 200 and 250 metric tons of cocaine are shipped out of Venezuela by these routes,” Barr said. “Those 250 metric tons equate to 30m lethal doses.

Geoffrey Berman, US attorney for the southern district of New York said the accused called the operation the “cartel of the suns”.

“The name they chose reflects the cartel’s identity and operations,” Berman said. “It is a direct reference to the sun-shaped stars that Venezuelan military officers wear on their uniforms.”

Barr said the US would “explore all options” to put the accused Venezuelan leaders in custody. Almost all of them are still in Venezuela. Carvajal, the former intelligence chief, had been living in Spain but disappeared in November after a Spanish court approved a US request for extradition.

Another of the accused, Clíver Alcalá, broke from the Maduro camp in 2013 and and has admitted to plotting to overthrow Maduro with a mercenary army based in Colombia.

Reached by the Guardian in the Colombian city of Barranquilla where he still lives, Alcalá said he had been mistakenly accused.

“The Colombian authorities know where I am. They know I’m at home, and have no plans to run away,” he said. “I support the indictments against the Maduro regime but I’m a false positive. I shouldn’t be included.”

The charges portray Venezuelan drug smuggling as a major national security issue. The justice department statement on the indictments said: “Maduro and the other defendants expressly intended to flood the United States with cocaine in order to undermine the health and wellbeing of our nation. Maduro very deliberately deployed cocaine as a weapon.”

But US data for 2018, which shows 210 tons of cocaine passing through Venezuela, shows that six times as much passed through Guatemala in the same period.

“The evidence they point to against Maduro is thin, which suggests this is more about politics than about drugs,” said Geoff Ramsey, director of the Venezuela programme at the Washington Office on Latin America thinktank. 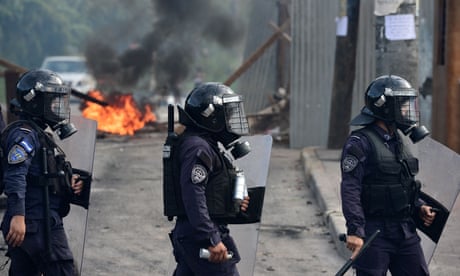 “Venezuela’s nowhere close to a primary transit country for US-bound cocaine. If the US government wanted to address the flow of cocaine they’d focus on corruption in places like Honduras and Guatemala – both governments that the administration has coddled in recent years.”

The charges torpedoed efforts to break a standoff between Maduro, supported by Russia and China, and the US-backed opposition leader, Juan Guaidó.

On Thursday afternoon, Tarek William Saab, the prosecutor general and a close ally of Maduro, announced an investigation into Guaidó, Alcalá – the ex-general also indicted by the US – and a host of alleged co-conspirators.

Just a day earlier, Maduro had extended an olive branch to his opponents because of the Covid-19 crisis.

“I’m ready to meet with all sectors that want to talk about the coronavirus pandemic,” he said in a televised address on Wednesday.

But that offer appeared to have been rescinded following the US charges.

“From the US and Colombia they have conspired and given the order to fill Venezuela with violence,” Maduro tweeted on Thursday morning.

“No negotiation is possible now,” said one source close to the US administration and the Venezuelan opposition. “There aren’t going to be elections, how could there be?”

David Smilde, a Venezuela expert at Tulane University, said it would be “tragic” if the indictments stopped the Maduro government receiving international assistance during the coronavirus epidemic.

He also added that the charges would make it harder for the US to force Maduro out.

“These indictments seriously increase the exit costs for Maduro, Cabello and Moreno. It is hard to imagine Maduro being willing to do anything other than hunker down knowing he has a price on his head,” Smilde said. “These moves effectively ensure a longterm deadlock between the US and Venezuela, just as we have seen with Cuba.”

It is not the first time the US has indicted an incumbent head of state in Latin America. The Panamanian dictator, Manuel Noriega, was charged with drugs offences in 1988, and a year later, US forces invaded Panama to arrest him.

In October last year, the Honduran president, Juan Orlando Hernández, was named as a co-conspirator in a New York court which convicted his brother Juan Antonio “Tony” Hernández, in a large-scale drug conspiracy case.

The president, who is a close ally of the US administration, was not charged.