/ Home / News / Accountability / Alphabet Agencies / Want To Save The Environment? De-Fund The Pentagon

Millions of people are uniting in demonstrations worldwide against our civilization’s ecocidal march toward extinction, which makes me so happy to see. It’s really encouraging to see so many young people burning with love for their planet and a hunger to reverse the damage that has been done to our ecosystem by the refusal of previous generations to turn away from our path of devastation. This must continue if we are to survive as a species.

The challenge now is the same perennial challenge which comes up every single time there is a massive and enthusiastic push from the public in a direction that is healthy: such movements always, without exception, become targeted for manipulation by establishment interests.

I write all the time about how this has happened with the intrinsically healthy impulse of feminism; I just finished watching an MSNBC pundit proclaim that anyone who still supports Bernie Sanders over Elizabeth Warren is a sexist. This corralling of healthy energy into the advancement of corrupt establishment interests happens with feminism, it happens with the healthy fight against racism and antisemitism, and of course it happens with environmentalism.

Of course it does. People get very emotional when you say this, even if you fully support environmentalism and don’t have any objections to the overall scientific consensus about what’s happening to our environment, but environmentalism is not destined to be the one and only popular movement which establishment interests don’t move mountains to co-opt.

We know that our oligarchic empire will do literally anything, up to and including murdering a million Iraqis, to secure control over energy resources. We know this with absolute certainty.

Therefore we can also know with certainty that they are working to ensure that when new energy systems are put in place, they are put in place in a way which allows the oligarchs to retain their power, and ideally to expand it, without losing their thrones to rival plutocrats, to governments, or (worst case scenario) to the rank-and-file public gaining control over their own energy. This agenda is on the table. It is happening.

When it comes to our future, the ruling elites have compelling narratives worked up by teams of talented creatives to sell us the products they want us to buy. They know exactly where they want to herd us.
We just have a notion of “No, not that!” We need a vision or we will fail. pic.twitter.com/tyngFzCdPI

The ruling elites have many advantages over us, but one of the greatest is the fact that they know exactly what they want and exactly where they’re trying to push things, whereas we the general public, on average, do not. If we only had one positive anti-establishment direction to push in there’d be no stopping us, and as soon as we find one the oligarchs will be done.

But in general and on average what we have is a few clear ideas about what we don’t want and a great many vague, frequently contradictory ideas about what we do want. This lack of clarity in direction always leaves us highly susceptible to the influence of any well-funded narrative manager who steps forward to say “Oh yeah I know exactly where we’re going! It’s this way, follow me!”

Luckily for us, there’s a very clear demand we can add into the mix in this new push for environmentalist reforms which runs directly counter to the interests of the empire that is trying to manipulate our healthy impulses: de-fund the Pentagon.

Related Chemtrail Agenda Exposed: Reverse Engineering the Goals of Terraforming / Geoengineering / Chemtrails: What Biologicals Are Compatible with the End Result?

There is no single, unified entity that is a larger polluter than America’s dishonestly labeled “Department of Defense”. Its yearly carbon output alone dwarfs that of entire first-world nations like Sweden and Portugal; if the US military were its own country it would rank 47th among emitters of greenhouse gasses, meaning it’s a worse polluter than over 140 entire nations.

That’s completely separate from the pollution already produced by the US itself. None of the sociopathic corporations whose environmental impact is being rightly criticized today come anywhere remotely close to that of the Pentagon. They are going under the radar.

On Earth Day, MintPress brings you a piece originally published last May, on the U.S. Department of Defense’s toxic legacy throughout the world. The DoD produces more hazardous waste than the five largest U.S. chemical companies combined.https://t.co/iw0tqHyWXj

And that’s just greenhouse gas emissions, which the Pentagon’s poisonous effects on our environment are in no way limited to. As journalist Whitney Webb highlighted in an excellent article for Mintpress News about the wildly neglected subject of the US military’s ecological toxicity: “Producing more hazardous waste than the five largest US chemical companies combined, the US Department of Defense has left its toxic legacy throughout the world in the form of depleted uranium, oil, jet fuel, pesticides, defoliants like Agent Orange and lead, among others.”

Webb documents how the US “has conducted more nuclear weapons tests than all other nations combined”, how US military interventionism in Iraq “has resulted in the desertification of 90 percent of Iraqi territory, crippling the country’s agricultural industry and forcing it to import more than 80 percent of its food,” and how “US military bases, both domestic and foreign, consistently rank among some of the most polluted places in the world.”

“While the US military’s past environmental record suggests that its current policies are not sustainable, this has by no means dissuaded the US military from openly planning future contamination of the environment through misguided waste disposal efforts,” Webb writes. “Last November, the US Navy announced its plan to release 20,000 tons of environmental ‘stressors,’ including heavy metals and explosives, into the coastal waters of the US Pacific Northwest over the course of this year.”

This is all a massive environmental burden to take on for a branch of the government which provides no other service to anyone beyond bullying the rest of the world into obedience, wouldn’t you agree? So get rid of it. 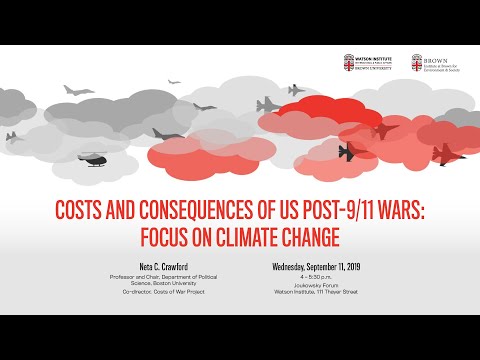 Surely with all this talk about the huge, sweeping changes that are required to avert climate catastrophe we’re not going to overlook the world’s single worst polluter just because a few think tankers and their plutocratic sponsors believe it’s important for the US-centralized power alliance to retain total global hegemony? If we’re making huge, sweeping changes, the completely needless globe-spanning US war machine would be the obvious place to start.

That’s something we can inject into the mainstream dialogue as this environmental movement grows, and the cool thing about it is that the establishment manipulators can’t reject it or they’ll expose themselves. It’s something we can demand that they can’t legitimately say no to.

We can surf this clear, concrete, exciting and utterly indisputable idea on the surging momentum of these climate demonstrations, and the same healthy impulse to save our planet that these budding activists are now embodying will lift it right up and carry it to the top of mainstream awareness. No sane person will reject this, so if anyone pushes back against it to say “No, not that,” they’ll immediately spotlight the insane agendas they serve.

The US does not need any more military power than what other normal nations have: enough to defend its own easily defended shores from unprovoked attack. Anything beyond that, and certainly the hundreds of environmentally toxic military bases circling our planet, exists solely for the benefit of murderous dominating imperialists and sociopathic war profiteers.

Demanding a reversal of US military expansionism as a part of the environmental movement is sane on its face and will benefit everyone, and it will also help highlight all unwholesome elements of empire loyalism.