The Golden Age of Gaia expresses our great sadness at Colleen’s news.

Sheldan Nidle channeled the Galactic Federation of Light before being injured by a directed energy weapon.

I’m sure Colleen would appreciate any financial help we can offer (see bottom of article).

I am crying, but feel that now is the time to write this because, as part of our galactic family, you deserve to know.

About 7-8 months ago, Sheldan’s health, which had been fairly stable, started to noticeably decline. It was becoming more difficult for me to take proper care of him.

It started one early evening, while I was working upstairs. I heard a strange noise that sounded like some grunts and quickly descended the stairs to find Sheldan struggling to communicate. His speech was garbled, I couldn’t understand him. I realized he was unable to walk because he could not stand on his left leg. I thought he must have had a stroke. Having been in this scenario before, I knew the signs and called 911. The paramedics were there within 6 minutes. They took Sheldan to the hospital.

At the hospital, he experienced a seizure. I held him in my arms as his body convulsed. It was scary for both of us. I have witnessed seizures before so I can tell the difference between a stroke and a seizure. After a couple days in the hospital, it was determined that Sheldan needed more care than I could give him. It was the most difficult decision, but I had to agree. It had become impossible for me to properly care for him. The nurses were surprised that I had been taking care of him by myself for over 4 years, without much help. I was physically, mentally, emotionally and spiritually drained. I was beginning to decline too.

It took a few weeks before a convalescent home was found for Sheldan. Needless to say, I cried buckets of tears.

To give you a bit more background on what happened: Sheldan’s decline began on March 17, 2011. We had finished our free webinar on Starseeds and I went to Sheldan’s office to congratulate him on a job well done. As I entered the room he stood up to hug me like we did after every webinar.

Suddenly he fell back into his chair and his body doubled up over his desk. He exclaimed, “I’m so dizzy. I can’t see anything and I want to vomit.”

I ran over to him and helped him to our bed, where he sank down miserably. At the time, we concluded he was suffering from a severe case of vertigo. What we did not know was that he had been hit by a direct energy weapon (radiation bullet). It would never have occurred to us. Sheldan was so dizzy he could not walk. I waited on him hand and foot. For the first 10 days or so I had to feed him too. It took three months for Sheldan to return to work.

A week or so later, we received several emails from different parts of the world (England, Australia, New York and Florida) explaining that Sheldan had been hit by a direct energy weapon. At first I found it hard to believe, but the letters all said basically the same thing.

One day a psychic friend came to visit. When she walked into Sheldan’s office, she lost her balance and said she saw an energy pattern of radiation. At the time, she didn’t know about the DEW claims, but it all fit together.

The GF confirmed what we’d been told. I couldn’t help but ask, why did this happen? I thought Sheldan was protected. They explained that one committee had been assigned to the webinar itself, and another to after the webinar. Timing was crucial. Ever since the attack, Sheldan’s blood pressure has been extremely high. That was the beginning of his decline in health.

By September 2020, Sheldan’s personality had changed drastically. From research I learned that this is common in brain-damaged and dementia patients. It began when he would not let his best friend visit. Every Friday for years, a few of our friends had come to lunch. Now they were not allowed in our house. No one was. If anyone entered our home he would yell and scream. I am a very social being, and suddenly, I was isolated from my friends.

His decline continued. Soon, I became the enemy. He trusted no one. He became paranoid and screamed at me relentlessly. He would wake me up in the middle of the night demanding dinner. Soon he stopped taking showers or brushing his teeth. You get the picture. For me, everything was a challenge. I didn’t know how to handle this type of behavior. It was not like Sheldan. He stopped taking the medicine that was the only thing that controlled his excessively high blood pressure. I couldn’t sleep. My health started to be affected. I would cry every day for hours.

From that point, his health declined until it became evident he needed to be transferred to a care facility.

The last thing Sheldan said to me the day he was transferred to his new home was, “Keep PAO going. I have another book to write. I am going to make a comeback. Promise to keep PAO going.”

We are all with you, Shel, we are all dedicated to the Divine Plan. Truly, Together we are Victorious!

The good news is that Sheldan has made the adjustment better than I ever could have imagined. He is gaining weight. His disposition has improved. Sheldan’s sister, Susan, and I marvel at how good he looks. Color in his cheeks. The staff told us they enjoy talking with him because he knows so much about history and science. Susan asked, “What about the space stuff?” They replied, “Oh we find that entertaining.”

We are all on a journey that is leading to a marvelous series of new realities. As PAO members, we serve as conduits to transmit the sacred energies derived from years of re-discovering who we truly are. Sheldan’s body of work was created with the intention of awakening within us the great joy first shown to him by the Galactic Federation. His wish is for us to continue to take these teachings out to the world.

Thank you, dear friends, for all the support you have given Sheldan and me. Without your continual Starseed presence, we would have disappeared a long time ago.

As we transition to a 5-D world, Miles and I will continue to provide information from our monthly Webinar guests who are at the forefront of our new learning. Please know, we hold you in our hearts, as you do us, and we consider all of you our family.

If you feel inclined to write to me, I welcome your thoughts. 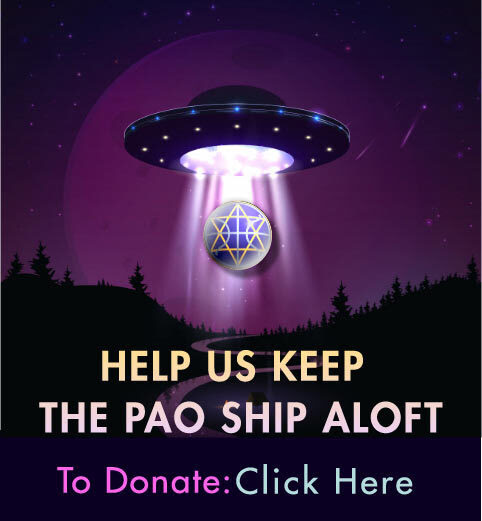