My thanks to Len, D, and Brian for their research, the fruits of which appear here. 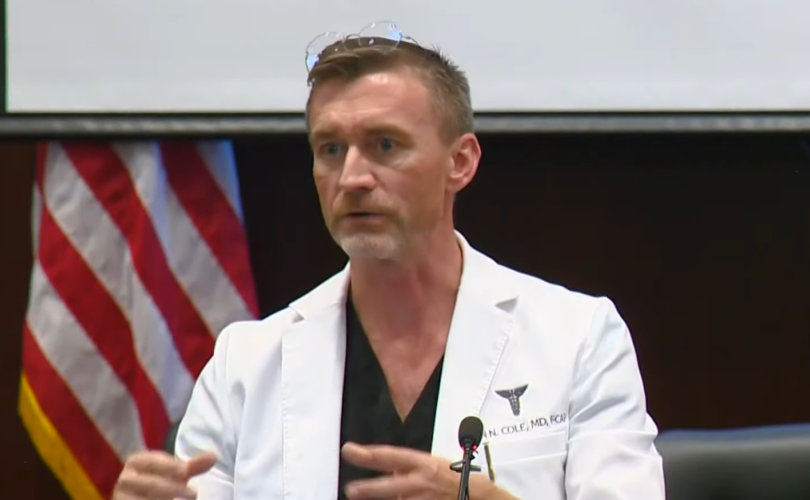 (LifeSiteNews) — A board-certified pathologist who runs a diagnostics lab said he’s been seeing “clotting” in the “lungs,” “vessels,” and “brain” in patients due to the COVID-19 jabs.

“In our data around the world, from the United States, from the U.K., from the EudraVigilance in Europe, we have seen more death and damage from this one medical product than all other vaccines combined in the last several decades, in just a short 8-month window of time.”

Corroborating Cole’s statements, the recent data from America’s Vaccine Adverse Event Reporting System (VAERS), co-managed by the Food and Drug Administration (FDA) and the Centers for Disease Control and Prevention (CDC), shows that there have been over 16,000 reports of COVID-19 vaccine deaths since the rollout in 2020, which is 5,000 more deaths than have been recorded since 1990 from all other vaccines combined.

According to American attorney Thomas Renz, who has analyzed the VAERS data with the help of a government whistleblower, VAERS underreports adverse effects “by a conservative factor of at least 5” and the real death total is at least 45,000 in the U.S. alone.

Cole said the COVID vaccines have done “more damage than any other medical product, therapy, shot, modality, of anything we’ve ever allowed to stay on the market to this point.”

“Do I mean to sound alarmist? No, I’m being factual. And when I look at it under the microscope, and I see the parts of people, or people that are no longer with us, the damage and the disease is caused by that spike protein,” he emphasized.

In a video produced by the Idaho state government in March, Cole said that since the rollout of the vaccines, he has seen a staggering increase in cancers among those who have received the abortion-tainted jabs.

“Since January 1, in the laboratory, I’m seeing a 20-times increase of endometrial cancers over what I see on an annual basis,” reported Cole in the video clip. “I’m not exaggerating at all because I look at my numbers year over year, I’m like ‘Gosh, I’ve never seen this many endometrial cancers before.’”

Cole explained that the COVID-19 vaccines seem to impact the immune system function responsible for combatting the growth of cancer cells and other viruses, referring to the phenomenon as a “reverse HIV response.”

Cole explained that the vaccines cause a suppression of a person’s “killer T-cells” similar to how HIV suppresses a person’s “helper T-cells”, and how both types of cells are integral to fighting off cancer cells and other damaging viruses.

In addition to endometrial cancer, Cole reported an “uptick” in melanomas, herpes, shingles, mono, and a “huge uptick” in HPV, which he attributes to the damage done to the immune system by the experimental shots.

Despite FDA approval, the COVID-19 vaccines have not completed clinical testing, with the earliest date for clinical trial completion set well into 2023. On the latest episode of “The Hidden Gateway” podcast, host Jesston Williams spoke to Dr. Robert Malone, an internationally recognized medical doctor and scientist who assisted with inventing mRNA vaccines.

Malone referenced two instances where citizens are being “enticed” to take what he refers to as the “experimental” vaccine.

“There was a period where West Virginia was trying to get people to get vaccinated,” Malone said. “And so they had a shotgun lottery. And in Canada, there was a policy of offering free ice cream to children to get them to take the jab even without their parents’ approval. So those are just two particularly clear examples of unfair coercion … It’s not actually legal.”

Malone likened what’s going on today with COVID vaccines to the illegal medical experiments conducted by Nazi Germany. “[During the Second World War], Jews and other ethnic groups were subjected to horrible experimental medical research,” Malone said. “And they justified it by saying it was for the common good.”

Malone said the Western World “agreed we weren’t going to do that anymore. Yet, from time to time we seem to forget, and of course, Tuskegee is one example, and frankly, this is another example.”

In an attempt to clear up misinformation coming from the medical establishment, Malone said fully vaccinated individuals can spread COVID. “The idea that if you have a workplace where everybody’s vaccinated, you’re not going to have virus spread is totally false. A total lie,” Malone said.

The vaccinated are actually the “super-spreaders” that everyone was told about in the beginning of the pandemic, Malone argued.

“If you consider the scientific fact that vaccinated people have less symptoms than the unvaccinated, but can still easily spread disease, consider your fellow vaccinated worker, whose unvaccinated son brought the disease home and gave it to him … He might not have any symptoms … but he’ll definitely be producing the virus. And he’s going to say, hey, I can go to work today. But he’s going to be spreading the virus like crazy.”

Malone also touched on the idea of “the noble lie:”

Malone denounced the “noble lie” as “paternalistic authoritarianism.” He said the idea of governance-by-lying goes back to Plato and Ancient Greek philosophy which argues that it’s “okay for politicians and people in authority positions to lie to the general public because they have special knowledge and ability to understand things … and the general public can’t cope with that level of information. And so it’s okay to lie to them.”

“I really disagree with this line of thinking,” Malone said. “Yet it has been public policy in the United States and worldwide in public health for a very long time.”