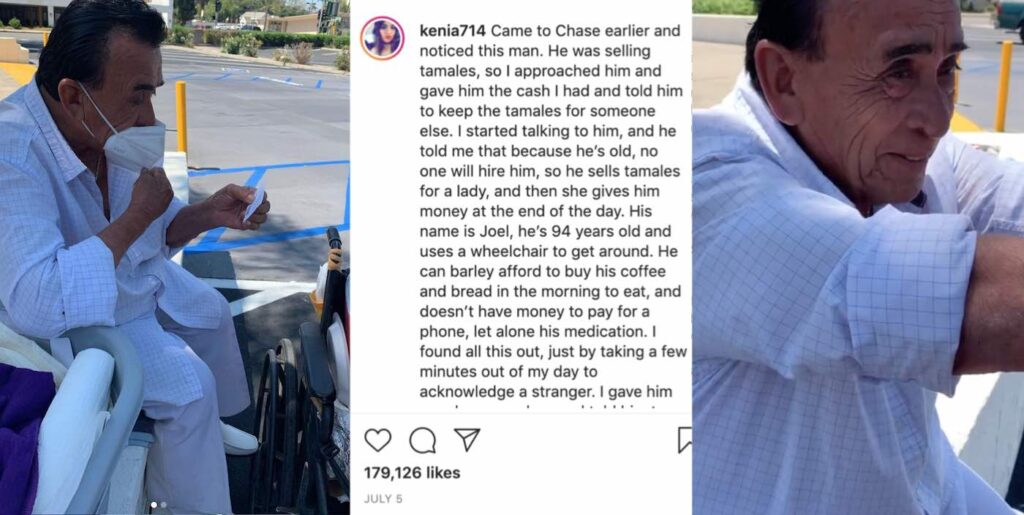 Strangers Raise $84,000 for 94-year-old Street Vendor in Wheelchair After One Woman’s Act of Kindness Goes Viral

It all started with a random act of kindness.

A young woman was walking in Santa Ana, California, when she came upon an elderly street vendor selling tamales. Seeing how tired he looked in his wheelchair, she decided to give him a few bucks and a sandwich—and she also gave him a compassionate ear to listen to his story.

Those gifts alone were enough to cause the 94-year-old to break down in tears. But what followed in the coming days has overwhelmed him with gratitude.

When Kenia Barragan first saw Jose Villa Ochoa, she thought of her own parents. “I felt for him,” she told KTTV News, “My parents are both older, and I would hate to see my dad out selling tamales for somebody and barely making ends meet.”

Known as ‘Don Joel’, he explained that although he wanted a job, nobody would hire him because of his age. In order to keep himself afloat financially, he started to sell tamales cooked by a local woman. At the end of each arduous day, she would give him a cut of the earnings. This allowed him to buy food, but was not enough for him to afford his medications or a phone.

The 28-year-old woman was happy to listen to Don Joel’s story, but she wanted to do more. So made an appeal to her followers on Instagram for some assistance. Within a week, friends and strangers overwhelmed her with more than $84,000 in donations.

In addition to the money raised for Don Joel’s retirement, Kenia purchased him a new wheelchair and a shiny new pair of shoes. Even though he’s 94, he says he feels like he’s 40 now, because the kindness has made him feel so alive. He describes the generosity as “life-changing.”

Kenia feels exactly the same way. She says she’s always looking for a purpose that helps people—and she’s been living in line with those values in her current job, working with people who have disabilities to get them transportation. Her goal in life is to establish a homeless shelter.

Kenia hopes this story inspires others to care more for those in their communities—and not just in terms of monetary donations. Taking the time to talk to someone who looks lonely or down on their luck can be more meaningful than we imagine.

And it can change a life.