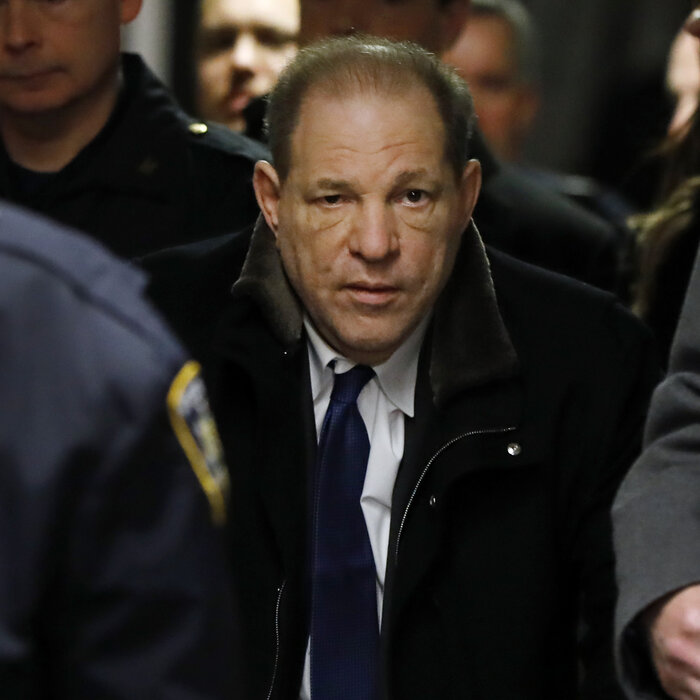 A Manhattan jury has found Harvey Weinstein guilty of rape and sexual abuse but acquitted him of the most serious charges, capping one of the most closely watched trials of the #MeToo era. The mixed verdict means the former Hollywood producer will likely spend time in prison.

It also is some measure of vindication for the six women who testified that Weinstein attacked and sought to intimidate them. Although he was acquitted of the most serious charges — two counts of predatory sexual assault and one count of first-degree rape, which might have put him in a cell for the rest of his life — the jury convicted him of third-degree rape and first-degree criminal sexual act.

The convictions stem from allegations by Miriam Haley, whose account was the basis of the criminal sex act charge, and Jessica Mann, whom the jury found had been raped by Weinstein.

The jury reached its decision after about 30 hours of deliberations over five days.

Weinstein did not visibly react as the verdict was read Monday. But defense lawyer Arthur Aidala said that Weinstein turned to him and that “all he kept saying is, ‘But I’m innocent. … I didn’t rape anyone.’ ”

The disgraced movie mogul was led from the court in handcuffs and was ordered to jail. Instead, he was taken to Bellevue Hospital for reasons that weren’t immediately clear.

He could face decades in prison. It will be up to New York Judge James Burke to determine just how long the 67-year-old will be behind bars. Sentencing is set for March 11.

In court, defense attorney Donna Rotunno asked Burke to grant bail on the condition that Weinstein continue to wear an ankle monitor, as he has done throughout the trial.

Citing his “significant medical issues,” Rotunno said that Weinstein is “receiving shots in his eyes so he does not go blind” and that he is still recovering from an unsuccessful back surgery. Burke wasn’t swayed, though he did agree to request that Weinstein be housed in an infirmary unit.

Following the verdict, Manhattan District Attorney Cyrus Vance Jr. thanked the women involved in the case for pulling “our justice system into the 21st century” by demanding that Weinstein be held accountable for his actions, no matter how long ago.

“It’s rape despite the complicated dynamics of power and consent after an assault. It’s rape even if there is no physical evidence and even if it happened a long time ago,” said Vance, who also called Weinstein a “vicious serial sexual predator.”

Weinstein’s legal team says it intends to file an appeal and request bail as quickly as possible, according to Aidala. He said defense attorneys are confident that a slew of what he called “appellate problems” will ultimately overturn the jury’s verdict.

“There’s not a doubt in my mind that if his name was Harvey Jones or Harold Jones, he would not have even been charged on this evidence,” Aidala said. “The evidence here was just not that strong.”

Monday’s verdict represents a milestone for the #MeToo movement supporting sexual assault survivors, which gained traction partly from the revival of allegations against the former movie mogul.

Although the former producer’s treatment of women had long been whispered about, allegations against him gained traction in national media with the publication of exposés in The New York Times and The New Yorker in October 2017.

Dozens of women eventually came forward with — or publicly repeated — their sexual assault allegations against Weinstein, many dating back decades.

Among them was actress Rose McGowan, who first spoke out against the powerful producer 20 years ago. On Friday, McGowan tweeted her relief over the guilty verdicts.

“I’m proud of the brave women who testified, they have taken out a monster on earth. Thank you to the prosecutor & jury who said not one more. Thank you to the public for examining things more deeply. I can finally exhale,” McGowan wrote.

Similarly, Mira Sorvino, who alleges she was sexually harassed and eventually blacklisted by Weinstein, wrote, “The beginning of #justice. More to come, my sisters. #weinsteinguilty.”

Although many of the allegations exceeded the statute of limitations, some spurred a formal criminal case in New York state. Vance submitted the initial slate of charges against Weinstein in May 2018. Those charges changed significantly over the following months, as others were added and one was dropped. 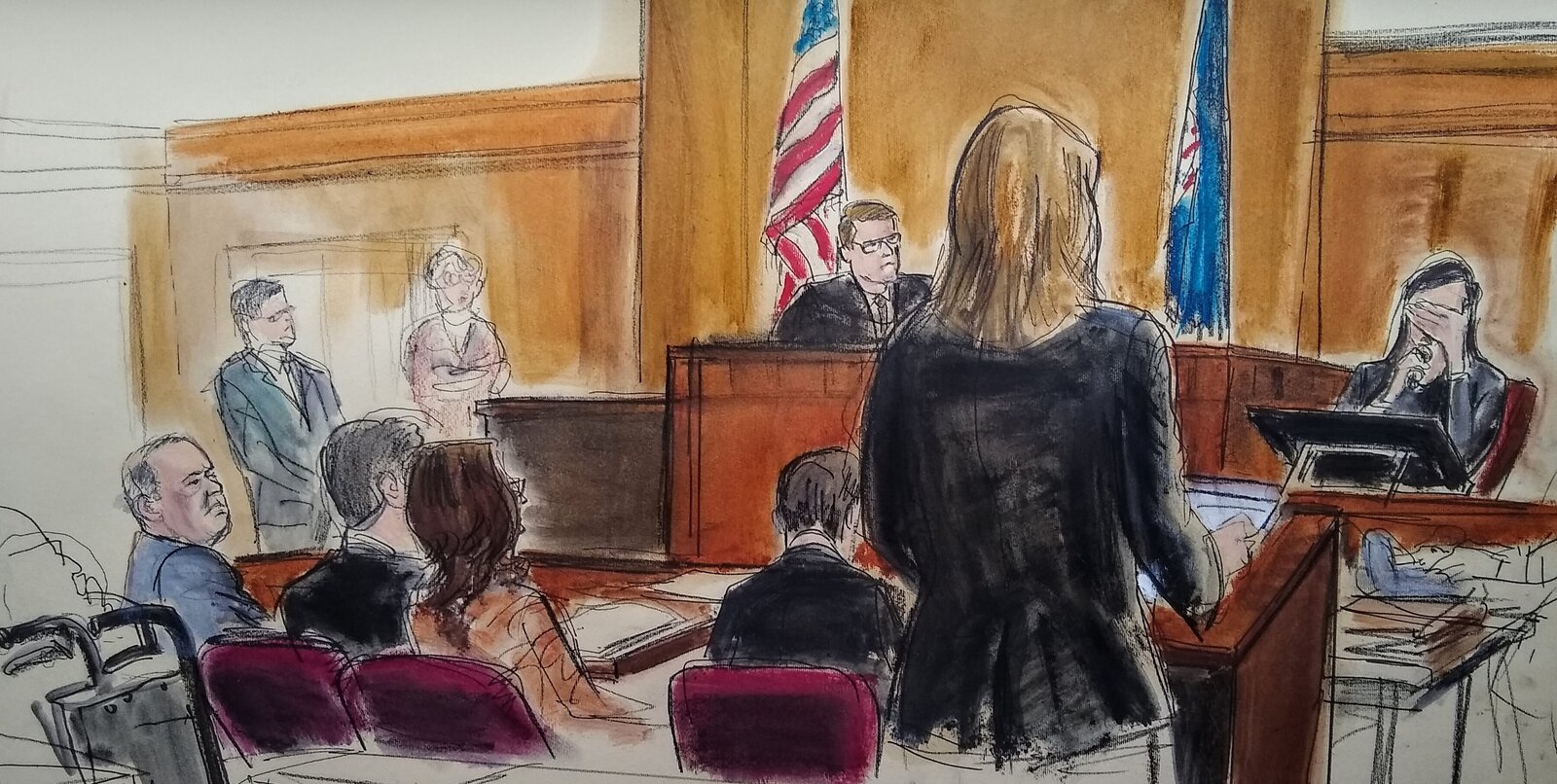 In this courtroom sketch, a witness weeps as she testifies late last month during the trial of former Hollywood producer Harvey Weinstein in Manhattan. Elizabeth Williams/AP

A charge of predatory sexual assault carries a heavier sentence because it means the perpetrator assaulted more than one person. In Weinstein’s case, the prosecution proposed that was The Sopranos’ actress Annabella Sciorria, who testified he raped her in the winter of 1993-94.

In finding Weinstein not guilty of the charges, it suggests the jury — made up of seven men and five women — were unconvinced by Sciorria’s emotional and graphic account.

The accounts of Haley and Mann were the foundation of the two guilty verdicts.

Haley, a former production assistant whom Weinstein offered work, testified during the trial that he invited her to his apartment in 2006. She said he pushed her onto a bed, removed her tampon over her protests and forcibly performed oral sex on her.

“I couldn’t even get away from him at all, let alone get out of the apartment,” said Haley. “Ultimately after a while, I just checked out and decided to endure it. That was the safest thing for me to do at that point.”

Mann testified that she met Weinstein nearly seven years after the attack on Haley, at a party in Los Angeles when she was an aspiring actress. She accused him of forcibly performing oral sex on her, too — though because that alleged act happened in LA, it wasn’t included in the New York charges.

She said her association with Weinstein nevertheless continued, developing into what she called an “extremely degrading” sexual relationship. At one point, Mann said, he pulled her up to a Manhattan hotel room, where he allegedly forced himself on her without using protection. Mann’s accusations led to the pair of rape charges against the former producer.

Four other women offered their own stories on the witness stand, testifying to what prosecutors described as a familiar pattern of behavior: initial offers of work to a young actress or model, followed by an encounter alone under false pretenses — then a forced sexual act and weeks of harassment and intimidation afterward.

“I thought he was a nice person. I thought he was an OK guy,” said actress Annabella Sciorra, who testified that Weinstein raped her at her Manhattan apartment in the winter of 1993-1994. The alleged incident, while outside the statute of limitations, helped support the two counts of predatory sexual assault. “I felt confused. I felt like I wished I had never opened the door.”

“When Harvey Weinstein met these witnesses, they were very different: They were scared, they felt isolated and they were alone,” the lead prosecutor, Manhattan Assistant District Attorney Joan Illuzzi, said in her closing arguments. She added that the witnesses did not take the stand “for a beauty contest, didn’t come for money, didn’t come for fame.”

“They came to be heard,” Illuzzi said. “They sacrificed their dignity, their privacy and their peace for the prospect that their voices would be enough for justice.”

Weinstein, for his part, had repeatedly rejected all of the allegations.

Although the producer did not personally take the stand at the trial, he has said that all of these encounters were consensual. And throughout the trial, his legal team often pointed to what they called friendly correspondence between the women and Weinstein after the alleged incidents.

His lawyers concluded by asking the five women and seven men of the jury not to get swept up in the media maelstrom that has surrounded the case.

“You don’t have to like Mr. Weinstein; this is not a popularity contest. And you have to remember that we are not here to criminalize morality — and thank God, because if we were, we would probably all be in some trouble,” said Rotunno. “In this country, it is the unpopular people that need juries the most.”

In the end, jurors found the defense team’s arguments persuasive — up to a point.

But their verdict doesn’t end Weinstein’s legal troubles: He is facing a trial in Los Angeles after local prosecutors last month charged Weinstein with raping one woman and sexually assaulting another in 2013.