This particular journey started a few weeks ago, when a Vedic priest (not a conscious Lightworker as far as I know) invited me to attend a religious function he was hosting for his son. He lives in Baltimore, Maryland and offered to pay the entire cost of my stay, including travel and lodging.

This is someone I have never met in person. I only spoke to him a few times on the phone and exchanged only a few emails. So this offer was very much unexpected. It would be very costly on his part.

I was initially hesitant, as I do not like the confines of an aircraft for long periods, and strongly dislike the long wait times and security measures at the airport. But it came to me that I needed to go. Apparently my physical presence was needed in Washington, DC. I also had the niggling feeling that it was related to the much anticipated Reval (1), but I cannot say for sure.

I obliged and arrived in the USA in the early hours of Thursday morning. I had traveling with me some companions whom he also offered to buy tickets for. Those people he knows very well.

With the background out of the way, I can now get to the interesting parts. On the aircraft, I did my customary invocations to the various Lighted Beings for their protection and a safe flight. This time however, for the very first time, I got a response.

“Don’t worry, we got this,” a voice within me said.

I had the distinct image of two massive angelic Beings on either side of the aircraft flying alongside, for all the world like an escort. This had never happened to me before.

“We will be handing you over to the Spirit Guardians of the USA when we get there. They are expecting you,” the angelic voice continued. “There are other Lightworkers coming as well for this.”

I was confused. The Spirit Guardians of a country are called Graam Devas in Vedic literature. But why were they expecting me? What was I to do really? I was going to Baltimore, Maryland. Where in the world does Washington, DC fit into that? Who were the other Lightworkers that were being called, and for what purpose?

I must confess, even though I have visited the USA several times, my knowledge of it’s geography is severely limited. This visit in particular was my first to this neck of the woods.

The rest of the flight passed without incident. Sometime into the aircraft’s descent into the USA the angelic Beings spoke to me again, “We are handing you over now to the Guardians.”

I wondered about that. We were still in the air. What was the marker for crossing over? I would have expected when we landed. At that same instant the wheels of the aircraft came down for landing. There was my answer.

I was greeted by the Guardians with some excitement. This was again highly unusual. I have always encountered a calm and collected Spirit (2). The excitement on the part of Spirit was palpable.

“Ok, then,” I said to them. “I hate waiting in lines. Do something to expedite this process for me.”

Part of me was doubtful about this whole thing with Spirit. I said this as much of a test of the authenticity of the experience as anything else. I didn’t have much hope of Spirit helping here, especially at such short notice. You just had to go through the process at the airport, right?

Well, one of the airport agents recognized someone in our group and pulled the lot of us out of the line. We went immediately to the immigration’s officer bypassing the entire line! Spirit managed it somehow. Another confirmation down.

The next day our little travel group were at breakfast discussing possible plans for the day we had free. I said nothing, being open to anything but hoping to get some shopping done. It just so happened that a few of them wanted to visit Washington DC, which was a little over an hour away by train…

En route on the train I had the image of me walking barefoot in grass while in DC to ground the cosmic energies into the Earth. I recalled my unusual Reiki levels 1 & 2 attunement several years ago. I say unusual because of a few things, only two of which I’ll share here.

One, the fact that I received both Reiki levels 1 & 2 simultaneously. This is almost never done. The normal course of things is to receive a level 1 attunement, let the energies work for 6 months at least and then receive the level 2 attunement. However, both Reiki Masters who were present got independently from Spirit that I was ready to receive both levels. Perhaps this was due to my intimate encounter with Spirit as I documented in My Experience of Samadhi.

Two, the fact that after the attunement, my German-born Reiki Master and gifted healer, Sofia, explained that she was guided to attune my feet as well as my palms. This is absolutely never done during a normal Reiki attunement. Apparently, because of my intimate connection with Spirit, wherever I would walk Spirit would be able to bless and heal the Earth through my physical presence.

Coming back to the present, I smiled. “Yeah right,” I thought to myself. “It’s a concrete jungle in there.” I had never been to DC before but from the little I had seen it was only concrete. Where was I going to get grass to walk on?

I then had the distinct sense of a great excitement in Spirit. A voice spoke very clearly and repeatedly to me, “The Lion is coming.”

Again and again I had the image of lions in my mind. I felt as though they were referring to me as the Lion somehow. At the time I couldn’t imagine why.

Once in DC we went straight to the White House. To my surprise, there was lawn around the White House with people standing around taking pictures. So there was my opportunity to walk barefoot, which I did.  I also noticed quite a number of cloud-ships hovering around, but I thought it normal, this being the White House and all.

While walking around the White House itself I came across an area which one of my companions identified as a reflecting pool. Just off to the side there was an interesting looking statue on a pedestal. We walked around to investigate. It was a statue of a general on a horse, flanked on four sides by lions on pillars! 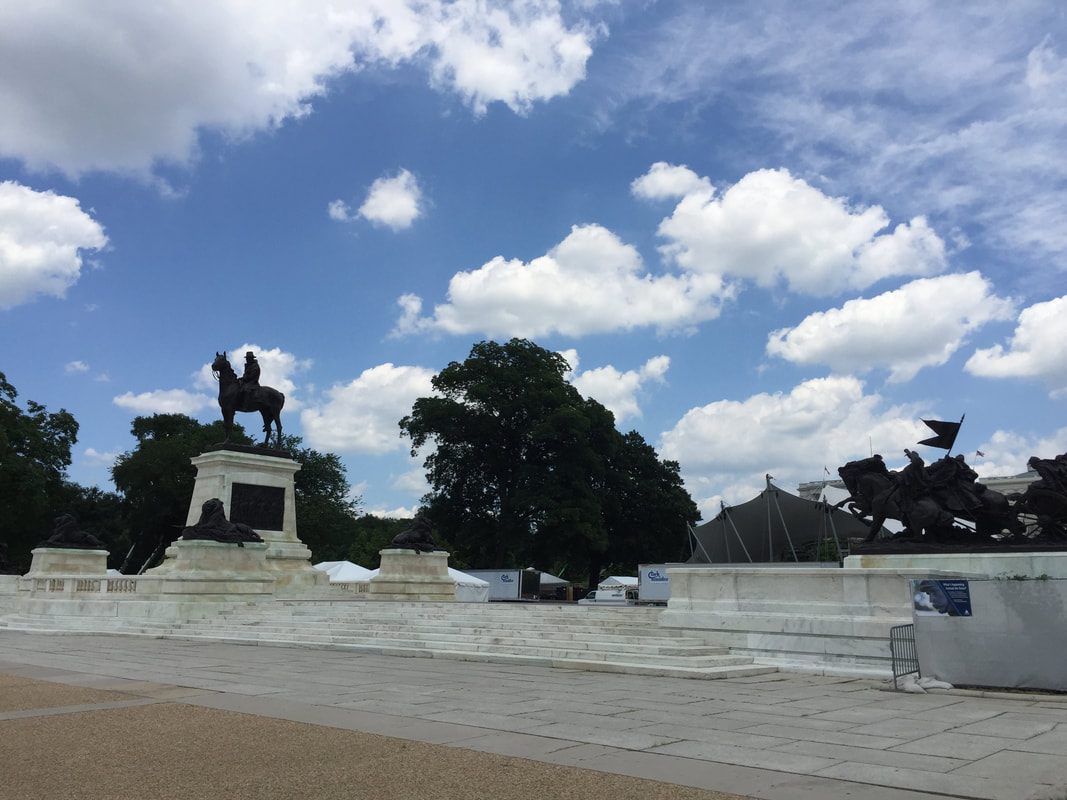 Photo of the lion guardians in Washington DC

(1) A global financial reset, said to be taking place behind the scenes, which would end the fiat system of money and see an equitable redistribution of funds and assets to nations throughout the world.

(2) I use the term Spirit as a generic term to refer to any transcendental Being including Angels, Devas, Elementals, and galactic and terrestrial Ascended Masters.