/ Home / Uncategorized / What Are We About Here?

Steve is on vacation.

A high priority for the 2012 Scenario was – and for the Golden Age of Gaia is – creating and promoting a cross-cultural spirituality.

“I find what you say about the end of times very intriguing. I am a Christian and I also believe that we should be watchful for things unseen that are coming our way.

“However I guess we would disagree on the nature of the end of ages. While I am naturally open minded, in the course of time I came to believe that there is only one God. This God revealed himself in the Bible as well as in the life, death, and resurrection of Jesus.

“This same God has stated that we will not be able to discern the time when the world will end, but that in the end of days there will be an overflow of persuasive but deceptive teachings that will confuse us and hide the truth from us.

“Anyway, I just want to be real honest with you, I am skeptical of your views. However I would really like to know why it is that you are absolutely convinced of the 2012 scenario. Seems to be based on a patchwork of bits and pieces of different, often contradictory religions.”

Thank you for writing.

I agree with you. There’s only one God. That God exists as everything that is. He, She or It (God has no gender) is manifest and unmanifest, was, is, and always will be the All in all, omnipotent, omniscient, omnipresent. Existing beyond the universe, is it hard to conceive that this same God is worshiped by Christians and Hindus and Muslims and Jews, to name but a few of God’s worshipers?

I think that when Jesus said “I am the way, the truth and the life,” the “I” that he was referring to was the “Self,” not Jesus the historical person or even Jesus the spirit. (1) This Self is a fragment of the All-Self, the Universal Self that God is. Christians call it the “Christ.” Hindus call it the “Atman.” What difference lies in a name?

The Hindus also have a Trinity and it turns out, in my opinion, to be the same Trinity that Christians worship. People on this site have heard me talk about this before so I’ll simply refer you to those articles. (2) It turns out to be the same because the Trinity is real; it exists; it is eternal.

If yours is the apocalyptic vision of the end of time, yes, we disagree. But then we would also disagree that this is the end of time. Time will end in a manner of speaking. And this is the end of a cycle. But it is also the beginning of another cycle. We won’t disappear nor will experience be discontinuous. Life will continue and we along with it.

I belong to a community of spiritual seekers who augment their knowledge of and love for Jesus and other spiritual masters with a consideration of other sources of information. We listen to angels and archangels as well as ascended masters, members of the White Brotherhood. The latter are known to students of mysticism but not to others generally.

We listen to galactic teachers who surround this planet but don’t interfere with our free will until a certain period is reached in these end times. Then, we think, they’ll help us to complete this cycle successfully and without blowing each other apart.

We listen to contemporary enlightened teachers, intuitives, spiritual scholars, indigenous leaders, all of whom also share a certain body of knowledge about these end times.

That body of knowledge tells us that, at the end of a cosmic cycle such as we’re approaching in this period leading up to winter solstice, 2012, a period of human history is drawing to a close and a new cycle beginning. The very events that Jesus and his disciples described in certain passages of the Bible are indeed occurring for us in this end-of-cycle time while others are not.

From all our sources, we hear commonly that this end of cycle will see a return of the saints and sages, who’ve summoned the galactics to assist them, and a cleansing of the population through the reception of light from cosmic sources, followed by a planetary transformation, which all of us on this site are working towards and for.

There are no idle people here, no fanciful followers of low spiritual practices, no “dreamers” or simple-minded folk. We have carefully weighed the messages that we follow. We don’t hold that revelation ended with the transition of Jesus to the heavenly planes. We follow his further messages from the spirit planes and those of others as well, 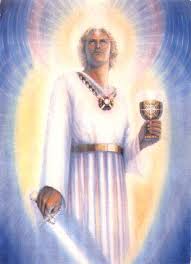 I don’t see what we study as bits and pieces. I think of it more as cross-cultural spirituality. The various religions and scriptures that we study are not contradictory. Far from it. They reinforce each other.

Some of us have found the common language of religions, sometimes called the Perennial Philosophy or Ancient Wisdom. We’re familiar with the code the Bible was written in. We can match the Bible’s wisdom to that of other spiritual traditions and we look upon that as a good thing.

So you’re welcome to browse our materials. There’s no requirement that you accept them. Time will tell and we’re content to let events unfold. We’ll see whether we’re accurate in our point of view or not and we’re as eager to see the outcome as you.

Thank you for dropping by. Feel free to come again. Please don’t leave thinking we do not respect and love Jesus because we do. And we also think that we’re doing his work, just as you are on your site.

It’s been a pleasure having a spiritual chat with you.